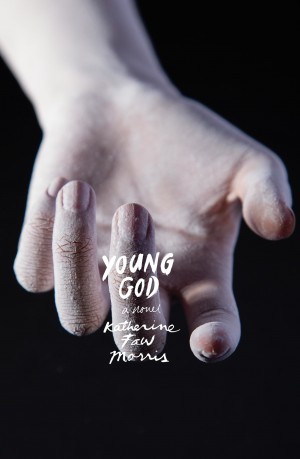 Stripped down and stylized—Winter’s Bone plus Less Than Zero—the sharpest, boldest, brashest debut of the year. Meet Nikki, the most determined young woman in the Carolina hills. She’s determined not to let the expectations of society set her future; determined to use all the limited tools at her disposal to shape the world to her will; determined to preserve her family’s domination of the local drug trade despite the fact that her parents are gone. Nikki is thirteen years old. Opening with a death-defying plunge off a high cliff into a tiny swimming hole, Young God refuses to slow down for a moment as it charts Nikki’s battles against the powers that be. Katherine Faw Morris has stripped her prose down to its bare essence—certain chapters are just a few words long—resulting in an electric, electrifying reading experience that won’t soon be forgotten. She quickly gets to the core of Nikki, her young heroine, who’s only just beginning to learn about her power over the people around her—learning too early, perhaps, but also just soon enough, if not too late. Evoking the staccato, telegraphic storytelling style of James Ellroy but with the literary affect of a young Denis Johnson and fierce sense of place worthy of Flannery O’Connor or Donna Tartt, Morris is a debut novelist who demands your attention—and Nikki is a character who will cut you if you let your attention waver.