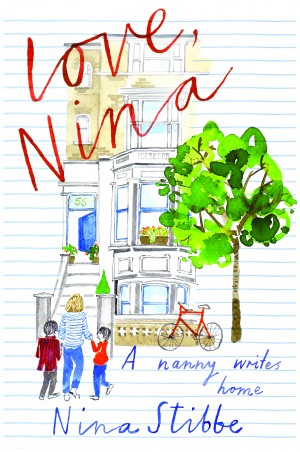 In 1982, 20-year-old Nina Stibbe moved to London to work as a nanny to two opinionated and lively young boys. In frequent letters home to her sister, Nina described her trials and triumphs: there’s a cat nobody likes, suppertime visits from a famous local playwright, a mysteriously unpaid milk bill, and repeated misadventures parking the family car. Dinner table discussions cover the gamut, from the greats of English literature, to swearing in German, to sexually transmitted diseases. There’s no end to what Nina can learn from these boys (rude words) and their broad-minded mother (the who’s who of literary London). A charming, hilarious, sweetly inspiring celebration of bad food and good company, Love, Nina makes a young woman’s adventures in a new world come alive.

It’s fantastic here, the house, the street, London. You can hear the zoo animals waking up in the morning.

Mary-Kay is funny. Nothing bothers her much—except she can’t stand having too much milk in the fridge (they have skimmed).

Her and Sam and Will all have the same basin haircut. Apart from that, she’s quite fashionable. She swears a lot (f and c), and reminds me of Elspeth, but not an alcy.

She loves hearing about you lot, so do S&W. They remember everything I tell them and they often ask about you all by name.

Yesterday MK asked, ‘So, is it Victoria who plays the violin?’ and I spat out my tea laughing. Honestly, Vic, they’re always laughing. I feel so happy here.

People come round loads. Some real weirdos. The other night one of them laughed at my ponytail (very short and a bit sticky- out). I saw her reflection in the French windows pointing.

I told Mary-Kay later, ‘I saw (that woman) pointing at my ponytail and smirking.’

MK said, ‘Oh, she’s just an idiot and you’re more of one for caring.’

In I982, at the age of twenty, I left my home in Leicestershire to take up a job as a nanny in London. I’d not been a nanny before but felt sure it would be a nice life.

And it was a nice life at 55 Gloucester Crescent. The household was made up of Mary-Kay Wilmers and her sons Sam, aged ten and a half who had some disabilities, and Will, aged nine. Also, there was Lucas the cat who was mostly out, and Alan Bennett, who lived across the street and often appeared at suppertime, and other neighbours, visitors and droppers-in.

Except for missing my sister Victoria, I was settled and happy straightaway.

Victoria stayed in Leicestershire, near where we’d grown up, working and living in a nursing home. I missed telling her every- thing every night, however mundane—the explaining of who was who and what he’d said and she’d said and what that might mean. Not that I very often wanted her opinion on anything, nor she mine, but we’d grown accustomed to a nightly conflab.

If there’d been a convenient phone where she lived these letters would not have been written because I’d have just rung her up. But there wasn’t, so I wrote to her and she wrote back and there was something nice about the writing of and getting of letters, so we carried on.

It occurs to me that if Vic had loved London as I did, my letters wouldn’t have been so detailed, as she’d have seen everything for herself on little trips. But she disliked London and came to stay only once or twice in all that time and spent those visits twitchy and longing to be home and not noticing the things I wanted her to notice.

These are the letters I sent to Victoria during my first years in London, starting with my arrival at Gloucester Crescent. The letters were often undated or partially dated. I have done my best to get them in the right order, but this was oddly tricky and I apologise if one or two events seem to occur slightly early or late. I apologise too for the things I got a bit wrong. Alan Bennett was never in Coronation Street for instance and Jonathan Miller has never been an opera singer as far as I know.

As for spelling, grammar and so forth, apart from some fine tuning, these have been left as they were in the original letters.

I’d like to thank Mary-Kay Wilmers who, in spite of misgivings, agreed to this book being published. Some names have been changed for obvious reasons, but most haven’t and I hope the cast will enjoy seeing themselves here.

(Some of the characters, and their occupations at the time. Some names have been changed.)

MARY-KAY WILMERS (MK): mother of Sam and Will (S&W), deputy editor of the London Review of Books

CLAIRE TOMALIN:  biographer and journalist, literary editor of the New Statesman and the Sunday Times

PIPPA: nanny to a family in Primrose Hill

AMANDA: nanny to a family in Gloucester Crescent

STEPHEN FREARS: father of Sam and Will, film director

THE EVANS: family in Gloucester Crescent

Being a nanny is great. Not like a job really, just like living in someone else’s life. Today before breakfast Sam had to empty the dishwasher and Will had to feed the cat.

Sam: I hate emptying the dishwasher.

MK: We all do, that’s why we take turns.

Will: I hate the cat.

MK: We all do, that’s why we take turns.

Sam: Anyway, Will, the cat hates you.

Sam: Don’t say shit in front of the new nanny. (Drops cutlery on to the floor and shouts, ‘Trevor Brooking’)

Will: Don’t say Trevor Brooking in front of the new nanny.

Sam had porridge (made by me in a pan). Tea, no sugar. Pills. Will had grilled tomatoes with garlic (he made it himself, except for lighting the grill) and tea, three sugars.

MK had hippy bread (not granary), toasted. Earl Grey, one eighth of a spoon of sugar.

We are very near the zoo, but they never go there. And nearish to Madame Tussaud’s but they never go there either. They never do the things you’d imagine. Apparently only people who don’t live in London do all that stuff. Real Londoners just go to secret places that tourists don’t know about, like Hampstead Heath. Our closest, monopoly-wise, would be Oxford Street (green) or Euston Road (blue). But the funny thing is, how near everything is. You could walk pretty much anywhere. Distances seem further on the underground because you go all round the houses and not just from A to B.

Hope all’s well with you.

PS Jez lives up the road in halls of residence and his college (UCL) is very close to MK’s office on Gower Street, which is quite near Oxford Street.

Took Sam to Great Ormond Street Hospital for his regular check up with Dr Dillon. Sam gave his name to the receptionist as Willie Carson.

Just when I began to worry that we’d miss our turn—Sam having given the wrong name—Dr Dillon popped his head out and called Willie Carson.

On the way out of the consulting room:

Sam: By the way, I’m ditching the name Willie Carson.

Sam: You obviously don’t watch Question of Sport, then.

Sam is excited to have found out Dr Dillon’s first name (Michael). He can’t wait to go back to Great Ormond Street. He’s planning to say, ‘How are you, Mike?’

After hospital, we had lunch in Boswell Street. Sam had Spaghetti Napoli. MK had pasta with butter and garlic. MK was annoyed that the napkins were bitty. Sam ate half of his napkin by accident. It matched his Napoli (red).

That made Will think about a teacher at school, Miss X who his mates all call ‘Boss-eye’.

Will: All my friends say she’s cross-eyed but I’ve never noticed her eyes.

AB: You can’t be or you’d have noticed this woman’s eyes.

Will: I’m an eye-looker, except when it comes to teachers. You

never look them in the eye.

PS I think I’m a mouth-looker.

Mary-Kay is skinny (not too skinny). And therefore is always a bit chilly and has to wear cardigans and socks. Her legs and even her feet are slim, and therefore she has to take care with shoe styles, or they can look clompy. Everything has a consequence.

The kitchen is where we are most of the time. It’s a big room with a long table in one half and a sofa and telly in the other. Mary-Kay and Will like to sit on the back of the sofa with their feet on the seat bit. And me and Sam like to sit in the proper place. We watch Coronation Street, The Young Ones, Question of Sport, University Challenge, sports, snooker, football.

The walls are covered in ancient plates (blue and white mostly) and pictures—one of a cyclist, one of a man holding a fish by its tail, and a cutting of an old uncle of Mary-Kay’s who was a conductor in the USA (music, not bus) and a woman from the olden days in the worst shoes and perfect squares for teeth. And a very nice one of a black ship on blue water.

A massive dresser, like a Welsh but bigger, all covered in trinkets and pretend fruit, little animals and people and little cups and in each little cup a little thing.

Most of the plates we use for food, and mugs, are antique. Some chipped, some nice, some spooky. I have a favourite plate, white with dark blue rim. If Mary-Kay gets that one she says,‘How did I get the hideous plate?’

The knives and forks are giant. Some are white-handled (not to go in dishwasher).

Our usual places at the table for supper: Will at 11. Sam at 12. MK at 1. AB at 9 and me at 3 (rectangle clock-face). AB tries to go in Will’s place sometimes because he likes to be in the middle. Breakfast we all go wherever . . . apart from only Sam in Sam’s place.

Mary-Kay and Sam have chairs they prefer. Sam’s is a big square one with great curly arms and MK’s has a bar underneath that she can rest her feet on. I’ve got to admit, hers is nice foot-rest-wise, and once you’ve been in it nothing else feels as comfy. It’s a well-designed chair.

There are two tall lamps. MK hates it if these aren’t on and it’s the first thing she does when she comes down, unless I’ve switched them on, which I try to. There’s a plastic tablecloth which Sam hides food under and a great clanking bread bin.

The floor is planks of wood with gaps, so if you drop 5op it might go down (for ever). Sometimes slugs come up in the night. I’ve never seen this but MK says it’s a horrible thing to come down to first thing. It’s a common feature of this type of floor.

Wooden shutters at the window. You have to shut them or people walking past can look in. I don’t always remember to and people do (look in). If that happens, we always look out at them and it’s strange.

My rooms (two adjoining) are the nicest, I think. I have a giant mirror, like out of a posh pub. The surround is ornate and painted bright orangey-red.  I’ve got a bed in my bedroom, but I like sleeping in the mirror room, so have got a mattress in there too. I have a window to the front that looks over the street and a window at the back which looks over the gardens.