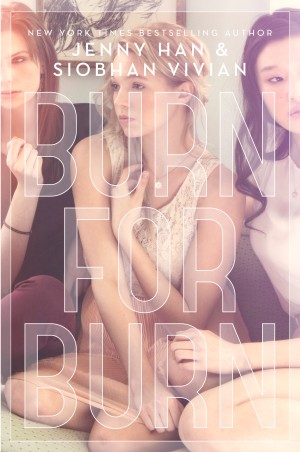 Jenny Han, the author of the New York Times bestselling The Summer I Turned Pretty series and Siobhan Vivian, the acclaimed author of The List, team up for Burn for Burn, the first book in a captivating trilogy. Set on postcard-perfect Jar Island, Burn for Burn introduces three very different girls who want the same thing: sweet, sweet revenge. LILLIA used to trust boys, but not anymore. Not after what happened this summer. And she’ll be damned if she lets the same thing happen to her little sister. KAT is through with being called a freak. She’s over the rumors, the insults, the cruel jokes made at her expense. It all goes back to one person—her ex-best friend—and Kat’s ready to make her pay. Six years ago, MARY left Jar Island because of a boy. But she’s not the same girl anymore. Now that she’s back, he’s gonna be in trouble… cause she’s coming after him. These three girls learn that sometimes, the only way to make things right is to do something wrong….