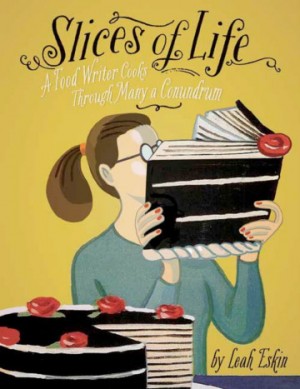 For nearly a decade, Leah Eskin has been serving up chronicles of everyday life, along with mouthwatering recipes, to the readers of her “Home on the Range” column in the Chicago Tribune. Now she has whipped up Slices of Life, a collection of her columns covering everything from her early married days to parenting adolescents—and everything in between. From “Best Friend Biscuits” to “Recovery Paella” to “Sullen Child Oatmeal Squares,” there’s always a recipe to cope with life’s sticky situations: the dinner party gone awry, the mortifying soccer match, the houseguest who eats nothing, the teenager who won’t listen. She tells the story of family life through its ordinary disasters—and pleasures. Slices of Life is both a charming memoir told through food, and with more than 200 recipes, it’s also a delectable cookbook that will enchant anyone who appreciates the big and little moments of life.

I write about food. People ask: Are you a chef ? Are you critic? Do you eat out every night? I explain: No. I’m a columnist. I cook at home.

I chose my career the summer I turned seventeen. On a road trip, I drew up a list of all the jobs that seemed Important, then crossed off the ones that sounded boring. The only thing left was journalist. I spoke French. I liked to travel. Obviously, I’d sign on as a foreign correspondent, based in Paris. I’d write long, insightful stories about Injustice and Strife.

I stuck with the program: In college, I studied international relations. I spent my junior year in Paris. I went to journalism school and got a magazine job in New York. Nights, I read Janet Flanner’s Paris Journal.

I moved on to freelancing and, weary of New York, moved to Chicago. On the job hunt, I arranged lunch with a reporter named Bob Blau. I fell for him before we met: I have a thing for double vowels.

Everything was new—new city, new boyfriend—and I tried writing about it in a new, personal, way. I sent a story to Alison True at the Chicago Reader. She liked it. And I liked her. I’ve kept the approach, and the friendship, since.

I always assumed I’d have to wait for marriage to get my Cuisinart, but when Bob bought me a white base model, it meant we could date indefinitely. We spent four years going out to dinner. One weekend we flew to Paris, split a platter of mussels and fries, and got engaged. At our wed- ding, I wore a veil that gathered into a silk-and-seed-pearl strawberry tart. The chocolate cake listed alarmingly, but tasted dreamy.

Two years into our married life, Bob was named a Nieman fellow. Before packing for Boston, I invited our friend Ann Marie Lipinski to brunch. She had been a fellow. Holding a drippy pear cobbler, I asked if the year away was good timing for a baby. “No,” she said. “Wait until it’s over.” Ann Marie’s a smart cookie. She would go on to edit the Chicago Tribune and run the Nieman Foundation. I do what she says. We thought up Hannah on the first day and delivered her on the last, after the graduation party.