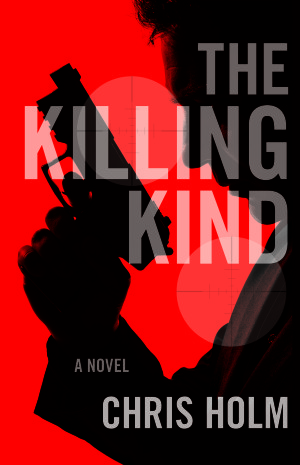 Hendricks makes his living as a hitman entrepreneur of sorts—he only hits other hitmen. For ten times the price on your head, he’ll make sure whoever’s coming to kill you winds up in the ground instead. Not a bad way for a guy with his skill-set to make a living—but a great way to make himself a target.

The streets of downtown Miami shimmered in the evening heat, the summer air rich with spice and song. Neon and rum and the warm ocean breeze conspired to make the city thrum with lurid anticipation. It was, after all, a Friday night in one of the most vibrant cities in the world. Still, no one who walked that night beneath the broad modern portico of the Morales Incorporated building suspected they’d briefly occupied the spot where a man was about to die.

Edgar Morales pushed through the revolving doors of the gleaming steel-and-glass building that bore his name and stepped onto the sunbaked concrete. After a day spent in climate-controlled comfort, the hot breath of the city set him sweating. He checked his watch. It was precisely six thirteen p.m. Most days, Edgar’s car would come around to pick him up at precisely six fifteen—but today was not most days. Today Edgar’s car would not be coming, for it had been disabled. Fixing it would delay his driver long enough to leave Morales exposed so that the man the Corporation—as the Cuban Mafia calls itself—sent to kill him could complete his task.

Hendricks watched Morales through the telescopic sight of his M40A3 sniper rifle from his perch some four blocks down the street. His vision was distorted slightly by the tinted window through which he peered, and by the stolen Escalade’s vibration as its AC labored to cool its spacious interior. Hendricks had found the vehicle in a long-term parking lot at Miami International a few hours back. Gleaming black with chromed-out rims, an enormous cabin, and tinted windows all around, it made the perfect downtown Miami sniper blind. He would have preferred to set up in one of the many towers that faced Morales Incorporated—shots from above were less likely to encounter an obstruction prior to finding their target, and both witnesses and routes of egress could be more easily planned for and controlled—but that damned overhang shielded the entryway from view at such an angle. So instead, he made do, slipping a valet a hundred bucks for the privilege of parking in the far corner of a boutique hotel’s parking lot, which had decent sight lines to the building’s entrance. Time was, a hundred bucks could have gotten you a room in this town—but not anymore, and certainly not at this address.

He’d been sitting there for an hour watching traffic roll by, the AC blasting in a vain attempt to keep the heat and humidity at bay. The air was so heavy and still, the strips of fabric he’d tied to the street signs to serve as wind indicators hadn’t moved since he’d first parked. The lack of wind was to Hendricks’ advantage. Wind was second only to gravity in its ability to alter a bullet’s trajectory, and since its force was not constant, it was far harder to account for. But he’d need to take the humidity into account. Air this water-laden was sure to slow his bullet down—enough, at this distance, to lower his point of impact by three full inches. Three inches could be the difference between a kill shot and a graze.

This muggy weather was disgusting, Hendricks thought, much like the cup of café con leche that sat undrunk in the cup holder beside him—thick, cloying, and sticky. And the palette of the city grated on him—everything was canary and coral and aquamarine. Hendricks missed the dark greens and cold blues of northern New England, where even the hottest summer sun failed to warm the deepest hollows of the forest, and the water ran cold all year long. Miami was beautiful, sure, but that beauty was as garish and artificial as the siliconed women who walked its streets.

Everything about the place felt insincere.

Best to get the job over with and get out.

Through his scope, Hendricks watched Morales look left and right, surveying the busy street as if for his missing ride, and then descend the wide concrete steps toward the curb. Men in business suits jostled for position beside bronzed women in skimpy beach gear, waiting for the crosswalk light to change.

“We’re a go,” Hendricks said. He turned the key in the ignition, cutting the engine but leaving the battery engaged. The world around him went silent, and the car’s vibration stilled. “Tell me you’re in the system.”

“I’m in,” came the reply through his Bluetooth, “but understand, the security is first-rate. It cycles through its diagnostics at five-second intervals. If any unauthorized command is detected, an alarm is triggered. And if that happens, the cops’ll be at your position in minutes.”

“I’m saying once you give the go-ahead, you’ll have three seconds, no more.”

Morales reached the curb. Hendricks pivoted his rifle first left, then right, taking in the scene through his scope. He gave a nod of satisfaction at what he saw, then lowered the passenger-side front window, sighting his target through the opening, his weapon’s bipod steadied against the leather sill.

At once, the lights for blocks around changed so that the intersections were red leading to this stretch of road, and green leading away. As traffic cleared in front of the Morales building, the light at the crosswalk changed as well, and the crowd around Morales stepped out into the street.

“Three,” said the voice in his ear.

Hendricks drew a measured breath and held it. His body processed the complex math behind the shot by instinct, making fine adjustments to account for the heat, air pressure, and distance from sea level. His heart beat slow and steady in his chest.

His body motionless, Hendricks squeezed the trigger—three pounds’ pressure, no more, no less.

When Morales heard the shot, he hit the deck. Hendricks had to hand it to the guy, he had good instincts—he reacted a full second before anyone else in sight. But ultimately, his gesture of self-preservation was futile; by the time you hear the gunshot, the bullet’s come and gone.

Hendricks’ target was Javier Cruz—the hitman the Corporation had sent to kill Morales. A button man for the Corporation since their early days running bolita rackets out of Little Havana, Cruz’d killed more men than he could count.

Not that anyone would know to look at him. Those he passed on his stroll down Brickell toward Morales Incorporated were like as not to smile at the kindly old Cuban man in his crisp white guayabera shirt, raw linen pants, and straw fedora. They had no idea his steel gray mustache hid beneath it the grisly scar of a lip split by a policeman’s baton, or that the policeman in question hadn’t lived to see the sun rise the following morning. They didn’t realize the limp in his gait wasn’t age or sciatica, but the result of two lead slugs fired off by the wife of a local politician who’d made it his business to disrupt the Corporation’s. She woke to find him in her bedroom while her husband was out of town, and if she hadn’t been so beautiful—or so very, very naked—perhaps Cruz wouldn’t have allowed her time to reach the gun in the nightstand. She buried two bullets in his leg, and he buried her in half a dozen spots the state over, leaving only a bedroom full of blood and a ring finger for her husband to find on his return, resting atop a photo of their four daughters. That man never spoke a word about the Corporation again.

Those Cruz passed didn’t know they were in the presence of a monster. But unfortunately for Cruz, Hendricks knew.

When Hendricks pulled the trigger, Cruz’s head exploded. For a moment, what was left of him stood there, inches from Morales, a steel blade gleaming in his hand—his bloodied fedora fluttering to the ground behind him. Then his body slumped to the sidewalk like a dropped marionette.

As the gunshot’s echoes died, the night was filled with the sounds of panic. The shriek of voices and tires both. The bleat of car horns. The wail of a distant siren fast approaching. Everyone within earshot had been trained by one awful news report after another to await that second shot, or third, or fifth. Trained to wonder if they’d prove another victim in the killer’s tally.

Hendricks, on the other hand, calmly withdrew the rifle and raised the blackened window. He knew it would take them several minutes to determine where the shot had come from—more than enough time for him to make his escape.

“You get out of the system clean?” he quietly asked.

“Who do you think you’re talking to?” the voice in his ear replied. “They’ll never even know I was there.”

At the curb outside his office building, Edgar Morales scrabbled to his feet, ashen and trembling. Though he tried, he couldn’t tear his gaze from his would-be killer’s corpse. If he’d had any inkling it would come to this when he’d begun buying up cheap tenements in Miami’s dodgy Goulds neighborhood with an eye toward gentrifying the area—and cleaning up a stronghold of the Corporation’s narcotics sales in the process—his altruistic streak would have taken a backseat to his healthy sense of self-preservation. But he hadn’t known, any more than he’d known until this very moment that he had no stomach for killing, even in self-defense.

His phone rang in his pocket. Morales flinched as if slapped, and then answered.

“Are you all right?” Hendricks asked.

Morales hesitated. As a point in fact, he was pretty fucking far from all right. But instead, he told Hendricks, “Yes. I trust my payment was received?”

“If it wasn’t,” Hendricks said, “you wouldn’t be around to ask me that.”

“Well, just think: now you’ve got your whole life to come to grips with it. Pleasure doing business with you.”

And then the line went dead.