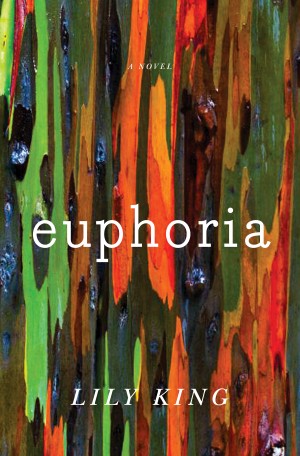 “It’s that moment about two months in, when you think you’ve finally got a handle on the place. Everything clicks and it all feels within your grasp…at that moment the place feels entirely yours. It’s the briefest, purest euphoria.”

From New England Book Award winner Lily King comes a breathtaking novel about three young anthropologists of the ’30s caught in a passionate love triangle that threatens their bonds, their careers, and, ultimately, their lives. English anthropologist Andrew Bankson has been alone in the field for several years, studying the Kiona river tribe in the Territory of New Guinea. Haunted by the memory of his brothers’ deaths and increasingly frustrated and isolated by his research, Bankson is on the verge of suicide when a chance encounter with colleagues, the controversial Nell Stone and her wry and mercurial Australian husband Fen, pulls him back from the brink. Nell and Fen have just fled the bloodthirsty Mumbanyo and, in spite of Nell’s poor health, are hungry for a new discovery. When Bankson finds them a new tribe nearby, the artistic, female-dominated Tam, he ignites an intellectual and romantic firestorm between the three of them that burns out of anyone’s control.

Set between two World Wars and inspired by events in the life of revolutionary anthropologist Margaret Mead, Euphoria is an enthralling story of passion, possession, exploration, and sacrifice from accomplished author Lily King.

As they were leaving the Mumbanyo someone threw something at them. It bobbed a few yards from the stern of the canoe. A pale brown thing.

He had broken her glasses by then, so she didn’t know if he was joking.

Ahead lay the bright break in the curve of dark green land where the boat would go. She concentrated on that. She did not turn around again. The few Mumbanyo on the beach were singing and beating the death gong for them, but she did not look at them a last time. Every now and then when the four rowers—all standing, calling back to their people or out to other canoes—pulled at the same time, a small gust of wind struck her damp skin. Her lesions prickled and tightened, as if hurrying to heal in the brief dry air. The wind stopped and started, stopped and started. She could feel the gap between sensation and recognition of it, and knew the fever was coming on again. The rowers ceased rowing to stab a snake-necked turtle and haul it into the boat, still writhing. Behind her, Fen hummed a dirge for the turtle, too low for anyone but her to hear.

A motorboat was waiting for them where the Yuat met the Sepik. There were two white couples on board with the driver, a man named Minton whom Fen knew from Cairns. The women wore silk dresses, the men dinner jackets. They did not complain about the heat, which meant they lived here, the men overseeing either plantations or mines, or enforcing the laws that protected them. At least they weren’t missionaries. She couldn’t have tolerated a missionary today. One woman had bright gold hair, the other eyelashes like black ferns. Both carried beaded purses. The smooth white of their arms looked fake. She wanted to touch the one closer to her, push up her sleeve and see how far up the white went, the way all her tribes wherever she went needed to touch her when she first arrived. She saw pity in the women’s gazes as she and Fen boarded with their dirty duffels and their malarial eyes.

The engine when it started up was so loud, so startling, that her hands rose to her ears like a child’s. She saw Fen flinch to do the same and she smiled reflexively, but he did not like that she’d noticed and moved away from her to talk to Minton. She took a seat on the bench at the stern with the women.

‘What’s the occasion?’ she asked Tillie, the gold-haired one. If she’d had that hair, the natives would never have stopped touching. You couldn’t go into the field with hair like that.

They both managed to hear her over the engine and laughed.

They had been drinking already, though it couldn’t have been much past noon, and it would have been easier to be called silly if she hadn’t been wearing a filthy cotton shift over Fen’s pajamas. She had the lesions, a fresh gash on her hand from a sago palm thorn, a weakness in her right ankle, the old Solomon neuritis in her arms, and an itchy sting between her toes that she hoped wasn’t another batch of ringworm. She could normally keep the discomfort at bay while she was working but it kicked in hard watching these women in their silk dresses.

‘Do you think Lieutenant Boswell will be there?’ Tillie asked the other woman.

‘She thinks he’s divine.’ This one, Eva, was taller, stately, bare-fingered.

‘But you are a married woman, my dear.’

‘You can’t expect someone to stop noticing people the minute the ring goes on,’ Tillie said.

‘I don’t. But your husband certainly does.’

In her mind Nell was writing:

—paint on face only

—hips emphasized by cinching of waist

—the valued thing is the man, not having one, necessarily, but having the ability to attract one

She couldn’t stop herself from doing it.

‘Have you been studying the natives?’ Tillie asked her.

‘No, she’s come from the Twilight Ball at the Floating Palais.’ Eva had the thicker Australian accent, the most like Fen’s.

‘A year and a half up that little tributary somewhere?’ Tillie said.

‘A year first in the mountains north of here with the Anapa,’ Nell said. ‘And then another five and a half with the Mumbanyo up the Yuat. We left early. I didn’t like them.’

‘Like them?’ Eva said. ‘I would think keeping your head attached to your neck might be a more reasonable goal.’

It was not safe to give them an honest answer. She did not know who their men were. ‘No. They fully understand and abide by the new laws.’

‘They’re not new,’ Eva said. ‘They were issued four years ago.’

‘I think to an ancient tribe it all feels new. But they obey.’  And blame all their bad luck on the lack of homicide.

‘Do they talk about it?’ Tillie said.

She wondered why every white asked about cannibalism. She thought of Fen when he returned from the ten-day hunt, his sad attempt to keep it from her. I tasted it, he finally blurted out. And they’re right, it does taste like old pig. It was a joke the Mumbanyo had, that the missionaries had tasted like old pig.

‘They speak of it with great longing.’

The two women, even long brazen Eva, shrank a bit.

And then Tillie asked, ‘Did you read the book about the Solomon Islands?’

‘Where all the children were fornicating in the bushes?’

‘Oh I don’t know,’ Tillie said. ‘I don’t understand what all the fuss is about.’

‘Is there fuss?’ Nell said. She’d heard nothing about its reception in Australia.

She wanted to ask by whom and about what, but one of the men was coming around with an enormous bottle of gin, refilling glasses.

‘Your husband said you wouldn’t want any,’ he said to her apologetically, for he did not have a glass for her.

Fen had his back to her but she could see the expression on his face just from the way he was standing with his back arched and his heels slightly lifted. He would be compensating for his wrinkled clothing and his odd profession with a hard masculine glare. He would allow himself a small smile only if he himself had made the joke. Fortified by several sips, Tillie continued her inquiry. ‘And what will you write about these tribes?’

‘It’s all a jumble in my head still. I never know anything until I get back to my desk in New York.’ She was aware of her own impulse to compete, to establish dominance over these clean, pretty women by conjuring up a desk in New York.

‘Is that where you’re headed now, back to your desk?’

Her desk. Her office. The diagonal window that looked out onto Amsterdam and 118th. Distance could feel like a terrible claustrophobia at times. ‘No, we’re going to Victoria next, to study the Aborigines.’

Tillie pulled a pout. ‘You poor thing. You look beat up enough as it is.’

‘We can tell you right here all you need to know about the Abos,’ Eva said.

‘It was just this last five months, this last tribe.’  She could not think how to describe them. She and Fen had not agreed on one thing about the Mumbanyo. He had stripped her of her opinions. She marveled now at the blankness. Tillie was looking at her with a drunk’s depthless concern. ‘Sometimes you just find a culture that breaks your heart,’ she said finally.

‘Nellie,’ Fen called at her. ‘Minton says Bankson is still here.’  He waved his hand upriver.

Of course he is, she thought, but said, ‘The one who stole your butterfly net?’  She was trying to be playful.

‘He didn’t steal anything.’

What had he said exactly? It had been on the ship coming home from the Solomons, in one of their very first conversations. They’d been gossiping about their old professors. Haddon liked me, Fen had said, but he gave Bankson his butterfly net.

Bankson had ruined their plans. They’d come in ‘31 to study two New Guinea tribes. But because Bankson was on the Sepik River, they’d gone north, up the mountains to the Anapa, with the hope that when they came back down in a year he’d be gone and they’d have their pick of the river tribes, whose cultures were said to be more complex. But he was still there, so they’d gone in the opposite direction from him and the Kiona he studied, south down a tributary of the Sepik called the Yuat, where they’d found the Mumbanyo. She had known that tribe was a mistake after the first week, but it took her five months to convince Fen to leave.

Fen stood beside her. ‘We should go and see him.’

‘Really?’  He’d never suggested this before. Why now, when they’d already made arrangements for Australia? He had been with Haddon, Bankson, and the butterfly net in Sydney four years ago, and she didn’t think they had liked each other much.

Bankson’s Kiona were warriors, the rulers of the Sepik before the Australian government had cracked down, separating villages, allotting them parcels of land they did not want, throwing resisters in jail. The Mumbanyo, fierce warriors themselves, told tales of the Kiona’s prowess. This was why he wanted to visit Bankson. The tribe is always greener on the other side of the river, she often tried to tell him. But it was impossible not to be envious of other people’s people. Until you laid it all out neatly on the page, your own tribe looked a mess.

‘Do you think we’ll see him in Ambunti?’  They could not go traipsing after Bankson. They’d made the decision to go to Australia. Their money wouldn’t last much more than half a year, and it would take several weeks to get settled among the Aborigines.

‘Doubt it. I’m sure he steers clear of the government station.’

The speed of the boat was disorienting. ‘We need to get that pinnace to Port Moresby tomorrow, Fen. The Gunai are a good choice for us.’

‘You thought the Mumbanyo were a good choice for us, too, when we headed there.’ He rattled the ice of his empty glass. He looked like he had more to say, but he walked back to Minton and the other men.

‘Two years in May,’ Nell said. ‘We had the ceremony the day before we came out here.’

They laughed. The bottle of gin came round again.