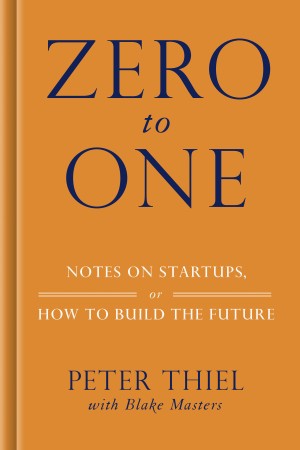 Silicon Valley legend Peter Thiel’s innovative new theory and formula for how to build the companies of the future: the only way to create lasting value and profits is to create and monopolize a new market instead of trying to compete in an existing one. For readers of The Lean Startup, Good to Great, and Black Swan.

Refining and expanding on the lecture notes from his start-ups course at Stanford (which received over a million views online), Thiel says that progress comes in two forms: vertical and horizontal. Horizontal progress means copying or iterating on products, ideas, and solutions that already exist; vertical progress is building new ones from the ground up. Yet horizontal progress yields only incremental improvements and short-term profits that are quickly competed away. To create lasting value, we must strive for vertical progress: going from 0 to 1. Thiel urges innovators in all fields not to compete on well-trodden paths but rather to find a new frontier, plant their flag, monopolize, then scale up as quickly as possible. The next great company won’t be another Microsoft or Apple—those have been done. Instead it will be something completely new that we have yet to dream up.