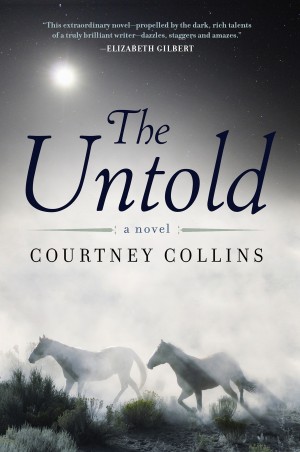 With shades of Water for Elephants and True Grit, a stunning debut novel set in the Australian outback about a female horse thief, her bid for freedom, and the two men trying to capture her.

It is 1921. In a mountain-locked valley, Jessie is on the run. Born wild and brave, by twenty-six she has already lived life as a circus rider, horse and cattle rustler, and convict. But on this fateful night she is just a woman wanting to survive though there is barely any life left in her. Two men crash through the bushland, desperate to claim the reward on her head: one her lover, the other the law. But as it has always been for Jessie, it is death, not a man, who is her closest pursuer and companion. And while all odds are stacked against her, there is one who will never give up on her—her own child, who awaits her.

If the dirt could speak, whose story would it tell? Would it favor the ones who have knelt upon it, whose fingers have split turning it over with their hands? Those who, in the evening, would collapse weeping and bleeding into it as if the dirt were their mother? Or would it favor those who seek to be far, far from it, like birds screeching tearless through the sky?

This must be the longing of the dirt, for the ones who are suspended in flight.

Down here I have come to know two things: birds fall down and dirt can wait. Eventually, teeth and skin and twists of bone will all be given up to it. And one day those who seek to be high up and far from it will find themselves planted like a gnarly root in its dark, tight soil. Just as I have.

This must be the lesson of the dirt.

Morning of my birth. My mother was digging. Soot-covered and bloody. If you could not see her, you would have surely smelt her in this dark. I was trussed to her in a torn-up sheet. Rain and wind scoured us from both sides, but she went on digging. Her heart was in my ear. I pushed my face into the fan of her ribs and tasted her. She tasted of rust and death.

In the wind, in the squall, I became an encumbrance. She set me on the ground beside her horse. Cold on my back and wet, I could see my breath breathe out. Beside me, her horse was sinking into the mud. I watched him with one eye as he tried to recover his hooves. I knew if he trod on me he would surely flatten my head like a plate.

Morning of my birth, there were no stars in the sky. My mother went on digging. A pile of dirt rose around her until it was just her arms, her shoulders, her hair, sweeping in and out of the dark while her horse coughed and whined above me.

When she finally arched herself out of the hole in the ground she looked like the wrecked figurehead on a ship’s bow. Hopeful as I was, I thought we might take off again, although I knew there was no boat or raft to carry us, only Houdini, her spooked horse. And from where we had come, there was no returning.

She stood above me, her hair willowy strips, the rain as heavy as stones. Finally, she stooped to pick me up and I felt her hand beneath my back. She brought me to her chest, kissed my muddied head. Again, I pushed my face into the bony hollow of her chest and breathed my mother in.

Morning of my birth, my mother buried me in a hole that was two feet deep. Strong though she was, she was weak from my birth, and as she dug, the wind filled the hole with leaves and the rain collapsed it with mud so all that was left was a wet and spindly bed.

When the sun inched awkwardly up she lowered me into the grave. Then, lying prone on the earth, she stroked my head and sang to me. I had never, in my short life, heard her sing. She sang to me until the song got caught in her throat. Even as she bawled and spluttered, her open hand covered my body like the warmest blanket.

I had an instinct then to take her song and sing it back to her, and I opened my mouth wide to make a sound, but instead of air there was only fluid and as I gasped I felt my lungs fold in. In that first light of morning my body contorted and I saw my own fingers reaching up to her, desperate things.