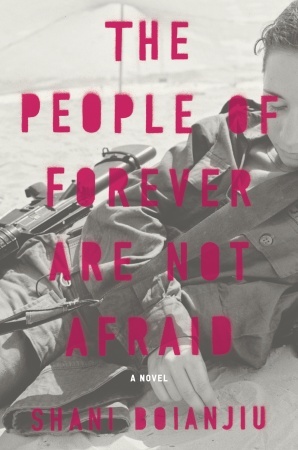 The People of Forever Are Not Afraid

The searing, riveting debut novel about young women coming of age in the military, from one of the National Book Foundation’s 5 under 35. Yael, Avishag, and Lea grow up together in a tiny, dusty Israeli village, attending a high school made up of caravan classrooms, passing notes to each other to alleviate the universal boredom of teenage life. When they are conscripted into the army, their lives change in unpredictable ways, influencing the women they become and the friendship that they struggle to sustain. Yael trains marksmen and flirts with boys. Avishag stands guard, watching refugees throw themselves at barbed-wire fences. Lea, posted at a checkpoint, imagines the stories behind the familiar faces that pass by her day after day. They gossip about boys and whisper of an ever more violent world just beyond view. They drill, constantly, for a moment that may never come. They live inside that single, intense second just before danger erupts.

In a relentlessly energetic voice marked by caustic humor and fierce intelligence, Shani Boianjiu creates a heightened reality that recalls our most celebrated chroniclers of war and the military, while capturing that unique time in a young woman’s life when a single moment can change everything.