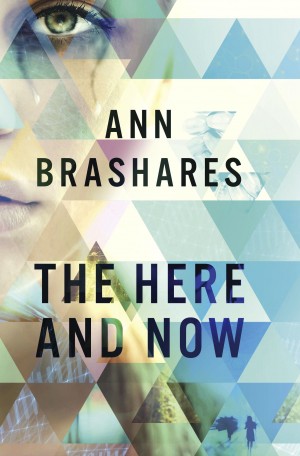 The Here and Now

A twenty-first-century take on an impossible romance in this unforgettable epic thriller.

Ann Brashares’ first novel for teens since The Sisterhood of the Traveling Pants is about a girl from the future who might be able to save the world . . . if she lets go of the one thing she’s found to hold on to. Follow the rules. Remember what happened. Never fall in love. Meet seventeen-year-old Prenna James, who immigrated to New York when she was twelve. Except Prenna didn’t come from a different country. She came from a different time—a future where a mosquito-borne illness has mutated into a pandemic, killing millions and leaving the world in ruins.

Prenna and the others who escaped to the present day must follow a strict set of rules: never reveal where they’re from, never interfere with history, and never, ever be intimate with anyone outside their community. Prenna does as she’s told, believing she can help prevent the plague that will one day ravage the earth. But everything changes when she falls for Ethan Jarves.

His dad had to work, so Ethan had gone fishing alone. Usually he just followed his dad through the woods to the deep bends of the creek, slapping at the prickers around his ankles. This time he was confounded by how little he knew his way even though he’d been here again and again. After today, though, he’d know.

When he finally came upon the river, it was a different part than he’d seen before, but same water, he thought. Same fish. He put his pack down, baited his hook and made a good cast. It was different when he was alone and his cast was for catching a fish instead of showing his father he knew how.

He listened to the water and tended his line and considered the stillness of the air. Except for that one part over there. Downstream it seemed like the air was moving. He squinted at it, then opened his eyes wide and closed them again, wondering if he’d wash out the strange impression that the air was rippling over the stream. But it still looked like that, more like that, air moving and scattering in a way that he could see.

He edged downstream, pulling his line along. As he walked he could see far past the bend to a footbridge. And at that distance the air and the leaves were still. But here the air moved faster and seemed to quiver like the water. As he moved slowly toward it the air took on a strange texture. He squinted again and saw in amazement how the sunshine seemed to refract into colors around him. He walked a few more steps and felt the air moving faster over his skin, almost like liquid but softer. He wanted to focus on pieces of the splintering light, but it was all moving too fast.

He lost hold of his fishing rod as the liquid of the air seemed to blur and blend with the liquid of the stream, pulling him inside the brew. He lost his hold on what was above and what was below, what was sky and what was earth, what there was to breathe, or even where his body began and ended. The odd thing was, he didn’t feel the urgent need to find out. It was like a lucid dream in that he occupied no part of the world he’d seen before, but he knew he would come back from it.

He had no idea how time passed, whether there was a big cascade of it or almost none at all. But at some point the spinning churn of river and air coughed him onto firm ground, and slowly the elements went back to their ordinary places. He closed his eyes for a time, and when he opened them again, the river was mostly in its banks, and the air went back to being invisible and the sunshine had reassembled itself. He sat up and gradually reoriented himself to basics like up and down. The storm produced a scoured, sparkling look through the trees, and it also produced a girl.

She was almost certainly part of his dream in that she was not quite made of regular-girl substance. The outlines of her weren’t quite distinct. She was the kind of girl he would dream up because she was approximately his age, her skin was bare except for the dark wet streamers of hair around her body, and she was supernaturally beautiful, like a mermaid or an elvish princess. Because he imagined her he felt it was okay to stare boldly at her.

But as he did it dawned on him that her arms were clutched around her body like she was cold and also embarrassed. Her legs were muddy up to her knees. He could hear her rough breathing. The longer he stared, the more details she accumulated, the more distinct her lines became, until he began to suspect she was real and that he shouldn’t keep looking at her like that.

He stood up, trying to keep his eyes mostly down. A couple more glances convinced him that, though the air around her remained oddly charged, she wasn’t a nymph of his invention, but a shivering skinny girl with muddy feet and a weird bruise spreading from the inside of her arm.

“Are you okay? Do you need help?” he asked. It was hard coming back from the dream. She’d been swimming maybe, and had gotten pulled downstream by the storm. It was awfully cold to be swimming.

She didn’t say anything. He tried to keep his gaze fixed on her face. Her eyes were big and her mouth was pressed shut. He heard the drip, drip, drips from the leaves around them. The sound of her trying to catch her breath. She shook her head.

She shook it again. She looked like she was afraid to move.

She was real, but she was faintly different from anyone else, and not only because she wore no clothes. She was still beautiful.

He unzipped his New York Giants sweatshirt and held it out, taking a few steps toward her. “Do you want it?”

She shook her head, but she hazarded a look at it and then at him.

He took another couple of steps. “Seriously. You can keep it if you want.”

He held it close to her, and after thinking a bit longer she shot out her arm and took it. He now saw that the blotch on her knobby arm wasn’t a bruise at all, but a scrawl of black writing. There were numbers, five of them written by hand with a marker or something.

He looked away as she put on the sweatshirt and zipped it all the way up to her chin. She took steps backward, away from him. In his mind a dark feeling was coalescing that she had been though something difficult.

She opened her mouth, but there was a space before any words came out. “No.” Breath, breath. “Thanks.”

She looked around anxiously. She opened her mouth again but again hesitated to say anything. “Is there a bridge?” she finally mustered.

He pointed downstream. “If you walk that way, you’ll see it right after the bend,” he told her. “Do you want me to show you?”

“I’m sure.” She looked sure. She stole one more glance at him, as though willing him to stay put, and took off toward the bridge.

He wanted to go with her, but he didn’t. He watched her stumble off through the trees in his blue Giants sweatshirt, looking overwhelmed by the tangled branches and the knotty roots and the mud and the bushes grabbing at her.

Once she looked back at him over her shoulder. “It’s okay,” he heard her say faintly before she disappeared.

Through dinner and deep into the night he thought about what he’d seen. Finally he got out of bed and, picturing her skinny, shivering arm, copied from memory the numbers: 51714. Because he knew they had to be important in some way.

For the next two and a half years Ethan thought of that day so often his memory began to warp. So much that he began to wonder if he’d imagined the whole thing after all. Until the first day of his sophomore year, when the very girl, now clothed, walked into his precalculus class and sat down one seat behind him.

The earth sweats in the morning. Really. You can go outside here almost anytime, just like Poppy said. I like to lie down on the grass in the backyard and wait for the sun to come up. Even if there’s sunshine for days, still the back of my shirt is damp, as though rain is wept from the ground.

Mr. Robert and Ms. Cynthia and a few others are in charge of most of the kids. They are trying to teach us how to fit in and always making us be EXTRA careful. Remember hearing about TV? Well, we watch it all the time to learn the right way to talk. One show is called Friends. People in the background are laughing the whole time and you don’t even know why. The one I like is called Family Guy, but Mr. Robert said I’m not going to learn anything from that.

I’m worried because I haven’t seen Poppy yet. Ms. Cynthia said he decided not to come at all, but I don’t believe that. He wanted to come more than anyone.