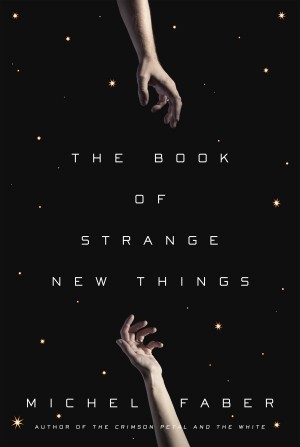 The Book of Strange New Things

The long-awaited new novel from the internationally bestselling author of The Crimson Petal and the White.

Peter—devoted pastor, dedicated missionary, and loving husband to his wife, Bea—has just accepted a demanding and perilous new job. He’s to travel to a new planet, Oasis, to work for a mysterious corporation called USIC. He’s tasked with reaching out to the indigenous race, to make sure they are as peaceful as they seem.

Resolutely devout and strengthened by his letters from Bea at home, Peter undertakes his job with complete focus. The Oasans are shockingly open to his teachings, but things start to unravel when Bea’s missives from Earth take a dark tone. Earth appears to be coming apart at the seams: typhoons and earthquakes are devastating whole countries and governments are crumbling. Even the hospital where she works has ceased to function. Their unearthly divide is testing Peter and Bea’s relationship to a startlingly degree.

Peter is thrown into crisis. USIC might be hiding its true motives in developing Oasis, and the Oasans themselves are frustratingly opaque. Bea’s desperate letters are only fomenting his doubt. Peter is suddenly faced with an impossible—and dangerous—decision: to follow his faith, or follow his heart. His life depends on it.

Major comeback: It’s been 12 years since The Crimson Petal and the White, which was widely, rapturously reviewed and sold more than half a million copies. This is a publication on par with Donna Tartt’s The Goldfinch, Kate Atkinson’s Life After Life, and major works by Michael Chabon, Kazuo Ishiguro, and Dave Eggers.