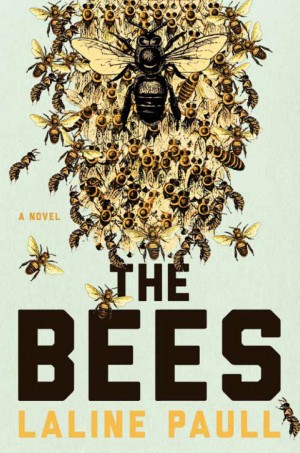 The Handmaid’s Tale meets The Hunger Games in this brilliantly imagined debut set in an ancient culture—where only the Queen may breed and any deformity means death—in which a devout young worker bee finds herself in possession of a deadly secret, and becomes a hunted criminal whose decisions will mean life and death for her entire hive.

The cell squeezed her and the air was hot and fetid. All the joints of her body burned from her frantic twisting against the walls, her head was pressed into her chest and her legs shot with cramp, but her struggles had worked—one wall felt weaker. She kicked out with all her strength and felt something crack and break. She forced and tore and bit until there was a jagged hole into fresher air beyond.

She dragged her body through and fell out onto the floor of an alien world. Static roared through her brain, thunderous vibration shook the ground and a thousand scents dazed her mind. All she could do was breathe until gradually the vibration and static subsided and the scent evaporated into the air. Her rigid body unlocked and she calmed as knowledge filled her mind.

This was the Arrivals Hall and she was a worker.

Her kin was Flora and her number was 717.

Certain of her first task, she set about cleaning out her cell. In her violent struggle to hatch she had broken the whole front wall, unlike her neater neighbours. She looked, then followed their example, piling her debris neatly by the ruins. The activity cleared her senses and she felt the vastness of the Arrivals Hall, and how the vibrations in the air changed in different areas.

Row upon row of cells like hers stretched into the distance, and there the cells were quiet but resonant as if the occupants still slept. Immediately around her was great activity with many recently broken and cleared out chambers, and many more cracking and falling as new bees arrived. The differing scents of her neighbours also came into focus, some sweeter, some sharper, all of them pleasant to absorb.

With a hard erratic pulse in the ground, a young female came running down the corridor between the cells, her face frantic.

‘Halt!’ Harsh voices reverberated from both ends of the corridor and a strong astringent scent rose in the air. Every bee stopped moving but the young bee stumbled and fell across Flora’s pile of debris. Then she clawed her way into the remains of the broken cell and huddled in the corner, her little hands up.

Cloaked in a bitter scent which hid their faces and made them identical, the dark figures strode down the corridor towards Flora. Pushing her aside they dragged out the weeping young bee. At the sight of their spiked gauntlets, a spasm of fear in Flora’s brain released more knowledge. They were police.

‘You fled inspection.’  One of them pulled at the girl’s wings, while another examined the four still-wet membranes. The edge of one was shrivelled.

Before the bee could speak the two officers pressed her head down until there was a sharp crack. She hung limp between them and they dropped her body in the corridor.

‘You.’ Their peculiar rasping voice addressed Flora and she did not know which one spoke, but stared at the black hooks on the backs of their legs. ‘Hold still.’ Long black callipers slid from their gauntlets and they measured her height.

‘That will be all, officers.’ At the kind voice and fragrant smell, the police released Flora. They bowed to a tall and well-groomed bee with a beautiful face.

‘Sister Sage. This one is obscenely ugly,’

‘It would appear so. Thank you officers, you may go.’

Sister Sage waited for them to leave. She smiled at Flora.

‘To fear them is good. Be still while I read your kin—’

‘A sanitation worker who speaks. Most notable… ’

Flora stared at her tawny and gold face with its huge dark eyes.

‘Do not question a priestess.’ Sister Sage ran her hands down the sides of Flora’s face. ‘Open your mouth.’ She looked inside. ‘Perhaps.’ Then she inclined her head over Flora’s mouth and fed her one golden drop of honey.

The effect was immediate and astonishing. Clarity washed Flora’s mind and her body filled with strength. She understood that Sister Sage wished her to follow in silence, and that she must do whatever she asked.

As they walked down the corridor she noticed how every bee averted her eyes and busied herself, and how the dead body of the young worker was already far ahead of them, carried in the mouth of a dark hunched bee who walked in the gutter. There were many more of the same type, all moving on the edge of the corridor. Some carried bundles of soiled wax, others scrubbed at broken cells. None looked up.

‘They are your kin sisters.’ Sister Sage followed Flora’s eyes. ‘All of them mute. Presently you will join them in Sanitation, and perform valuable service to our hive. But first, a private experiment.’ She smiled at Flora. ‘Come.’

Flora followed gladly, all memory of the killing lost in her longing to taste more honey.