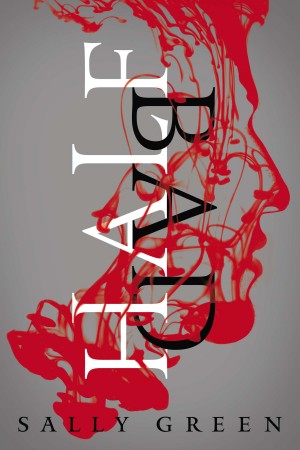 In modern-day England, witches live alongside humans: White witches, who are good; Black witches, who are evil; and sixteen-year-old Nathan, who is both. Nathan’s father is the world’s most powerful and cruel Black witch, and his mother is dead. He is hunted from all sides. Trapped in a cage, beaten and handcuffed, Nathan must escape before his seventeenth birthday, at which point he will receive three gifts from his father and come into his own as a witch—or else he will die. But how can Nathan find his father when his every action is tracked, when there is no one safe to trust—not even family, not even the girl he loves? In the tradition of Patrick Ness and Markus Zusak, Half Bad is a gripping tale of alienation and the indomitable will to survive, a story that will grab hold of you and not let go until the very last page.

I am standing on my tiptoes. The photograph is on the hall table but I can’t get hold of it properly. I stretch and stretch and nudge the frame with my fingertips. It’s heavy and hits the floor with a clatter.

I hold my breath. No one comes.

I pick the frame up carefully. The glass hasn’t broken. I sit under the table with my back against the wall.

My mother is beautiful. The photograph was taken on her wedding day. She is squinting into the sun, sunlight on her hair, a white dress, white flowers in her hand. Her husband is beside her. He is handsome, smiling. I cover his face with my hand.

I don’t know how long I sit there. I like looking at my mother.

Jessica appears. I’d forgotten to listen for her.

She grabs hold of the frame.

But my hands are sweaty.

And Jessica’s much bigger than me. She yanks it up, pulling me to my feet, and the frame slides out of my hands. She holds it high to her left and brings it down diagonally, slicing the edge of the frame across my cheekbone.

“Don’t ever touch this picture again.”

Jessica and the First Notification

“Mother asks, ‘Have you come to take him away?’

“The young woman at the front door says, ‘No. Absolutely not. We would never do that.’ The young woman is sincere and keen to do a good job but really naive.”

“Good, now listen. The naive woman says, ‘We are visiting all White Witches in England to notify them of the new rules and to help fill in the forms.’

“The woman smiles. The Hunter standing behind her has no smile. He is dressed in black like they all do. He is impressive, tall, strong.”

“No. After you are born Mother never smiles again. When Mother doesn’t reply, the woman from the Council looks concerned. She says, ‘You have received the notification, haven’t you? It’s very important.’

“The woman flicks through the papers on her clipboard and pulls out a letter.”

Jessica opens out the parchment she is holding. It is a thick piece, large, and the folds make a deep cross shape. She holds it delicately, as if it is precious. She reads:

“‘Notification of the Resolution of the Council of White Witches in England, Scotland and Wales.

“‘It was agreed that to facilitate increased protection of all White Witches, a record of all witches in Britain should be made and maintained.

“‘A simple coding system will be used for any witches and whets (witches under age seventeen) who are not of pure White witch parentage, using the references: White (W), Black (B), Fain/Non-Witch (F). Thus Half Codes will be recorded as (W 0.5/B 0.5) and Half Bloods recorded as (W 0.5/F 0.5) or (B 0.5/F 0.5). The mother’s code will be the first code the father the second. Half Codes will be maintained for as little time as possible (and not past age 16) until an absolute code (W, B, or F) can be designated to the person.

“Do you know what it means?” Jessica asks.

“It means that you are a Half Code. A Black Code. Non-White.”

“After the woman has finished reading out the notification, Mother still doesn’t say anything but goes back inside the house, leaving the front door open. The woman and the Hunter follow her in.

“We’re all in the lounge. Mother is sitting on the chair by the fire. But the fire isn’t lit. Deborah and Arran have been playing on the floor but now they sit on either side of her on the arms of the chair.”

“Standing right by her.”

I imagine Jessica standing there with her arms folded, knees locked back.

“The Hunter positions himself in the doorway.

“The woman with the clipboard perches on the edge of the other chair, her clipboard on her tightly clenched knees, pen in her hand. She says to Mother, ‘It’ll probably be quicker and easier if I fill the form in and you just sign.’

“The woman asks, ‘Who is the head of the household?’

“The woman asks Mother her name.

“The woman asks who her children are.

“The woman asks, ‘Who is their father?’

“Mother says, ‘He is dead. Murdered.’

“Then the woman asks, ‘And the baby? Where is the baby?’

Jessica turns to me and explains. “After Arran was born, Mother and Father didn’t want any more children. They gave away the cot, the pram, and all the baby things. This baby isn’t wanted and has to sleep on a pillow in a drawer, in an old, dirty onesie that Arran used to have. No one buys this baby toys or presents, because everyone knows it isn’t wanted. No one gives Mother presents or flowers or chocolates, because they all know she didn’t want this baby. Nobody wants a baby like this. Mother only gets one card but it doesn’t say ‘Congratulations.’”

“Do you want to know what it says?”

I chew my knuckles, but I don’t cry.

“The woman approaches the baby in the drawer, and the Hunter joins her because he wants to see this strange, unwanted thing.

“Even asleep the baby is horrible and ugly, with its puny little body, grubby-looking skin, and spiky, black hair.

Jessica has already found a way of saying my name as if it is something disgusting.

“Mother doesn’t answer. She can’t because it’s too awful; she can’t bear it. But everyone knows just by looking at the baby that its father is a murderer.

“The woman says, ‘Perhaps you can write the father’s name.’

“And she takes her clipboard to Mother. And Mother is crying now and she can’t even write the name. Because it’s the name of the most evil Black Witch there has ever been.”

“The woman goes back to look at the sleeping baby and she reaches out to touch the baby . . .

“‘Careful!’ the Hunter warns, because even though Hunters are never afraid, they are always cautious around Black witchcraft.

“The woman says, ‘He’s just a baby.’ And she strokes its bare arm with the back of her fingers.

“And the baby stirs and then opens its eyes.

“The woman says, ‘Oh goodness!’ and steps back.

“She realizes she shouldn’t have touched such a nasty thing and rushes off to the bathroom to wash her hands.”

Jessica reaches out as if she’s going to touch me but then pulls her hand away, saying, “I couldn’t ever touch anything as bad as you.”