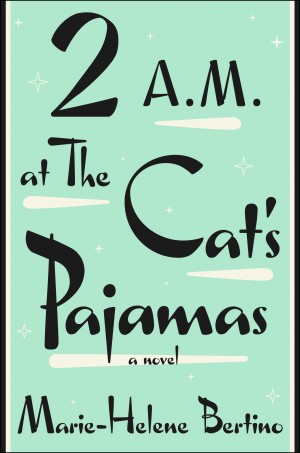 A sparkling, enchanting and moving debut novel featuring three unforgettable characters and their unlikely connection on one fateful night.

Madeline Altimari is a smart-mouthed, precocious nine year old who also happens to be an aspiring jazz singer. As she mourns the recent death of her mother, she doesn’t realize that on Christmas Eve she is about to have the most extraordinary day—and night—of her life. After bravely facing down mean-spirited classmates and rejection at school, she doggedly searches for Philadelphia’s legendary jazz club The Cat’s Pajamas, where she is determined to make her on-stage debut. On the same day, Madeline’s fifth grade teacher Sarina Greene, who has moved back to Philly after a divorce at thirty, is nervously looking forward to a dinner party that will reunite her with an old high school crush, afraid to hope that sparks might fly again. And across town at the Cat’s Pajamas, club owner Lorca discovers that his beloved haunt may have to close forever by the end of the night, unless someone can find a way to save it.

As these three lost souls search for love, music and hope on the snow-covered streets of Philadelphia, together they will discover possibility in one magical moment. A vivacious, charming and completely unique debut, 2 A.M. At The Cat’s Pajamas will delight readers on every page.

Silent flurries fall in the city. Actors walking home from a cast party on Broad Street try to catch them on their tongues. The ingénue, landing one on her hot cheek, dissolves into a fit of laughter. In Fishtown a nightmare trebles through the nose and paws of a dog snoozing under construction flats. The stone deity that rules the Rittenhouse Square fountain switches to life with a pronouncement of water while Curtis Hall musicians, late for final rehearsal, arpeggiate through the park.

The flurries somersault, reconsider, double back. The alleys of 9th Street bear witness as they softly change their minds. On 9th Street Mrs. Rose Santiago, shawl knotted beneath her chin, uses a broom to convince them away from her stoop. They refuse to land. She sweeps uselessly at the air.

In her room at the prow of her father’s apartment, Madeleine Altimari practices the shimmy. Shoulders, shoulders, shoulders. In front of the mirror, so she can judge herself, face sharp with focus. It is the world’s most serious shimmy. After thirty seconds, a flamingo-shaped timer trills and hops on its plastic legs. Madeleine stops shimmying and rejoins a Menthol 100 dozing in an ashtray on her vanity.

“Terrible.” She frowns at herself in the mirror. On a list by the ashtray, she marks “one minute” next to “The Shimmy.” Madeleine drags on the cigarette. The other categories: Singing, Scales, Guitar, are unmarked.

Madeleine is two days away from being ten.

She wears a clothespin on her nose and the uniform for Saint Anthony of The Immaculate Heart: a maroon sweater over a gray jumper over a gold shirt over a training bra with lemon-colored stitching. Thick, maroon tights. She is number three in 5th grade height-ordered line-ups, behind Maisie, whose spine is shaped like a question mark and Susan, the daughter of ballerinas. She read somewhere a clothespin worn religiously will shrink her un-ignorable nose. She thinks the occasional glimmers she can see through her window are flurries. She has trouble spelling the word rhythm. She likes when people in movies go to see movies. She cannot begin to understand why the dime is worth more than the fatter, wider nickel. She needs a haircut. Her favorite singer is Blossom Dearie and her favorite bass is upright. She spent the previous night dreaming of apples. She smokes Newport Menthols from the carton her mother was smoking when she died at the beginning of the year.

Eggs cuss and snap on the stove.

The unofficial rule of Saint Anthony of The Immaculate Heart is that Madeleine is never allowed to sing again in Church or at any assembly. Never, never, a whole page of nevers. Still, it is going to be a gold star day. She will suffer through Claire Kelly’s singing in morning mass, the girl’s nasal notes and plosive p’s filling the Church with unholy noise, spritzing the first row of pews on every heretical t, BUT THEN, her class will be making caramel apples. Madeleine has never had a caramel apple and she wants to taste one more than she wants god’s love.

Claire, the sound Madeleine’s toilet makes when it’s dry. Madeleine is forever adding water to its basin when it wails, from the purpose-specific can she keeps next to the toilet.

Like a comet, a horrific afterthought, a roach darts down the wall. Its path follows indecipherable logic. Madeleine screams in high C and crushes the cigarette. She pivots, rips a paper towel from a roll on her nightstand. The roach halts, teasing coordinates out of the air with its antennae. It senses her and is rendered paralyzed by options. Madeleine closes her eyes, makes the sound of a train whistle on a prairie, and squeezes. 9th Street Market roaches are full and round like tomatoes. This one leaves a mark on the wall but most of it gets flushed down the toilet.

Madeleine washes her hands. Breathes in and out. Worries she is a bad person for killing a roach. Instructs herself to stop panicking. It is time to sing.

She changes the record and releases the clothespin from her nose. She locks eyes with herself in the mirror and waits for the music to start.

My name is Blossom, I was raised in a lion’s den.

Is stealing other women’s men.

Madeleine’s mother filled a recipe box with instructions on how to do various things she wouldn’t be around to teach her. HOW TO MAKE A FIST, HOW TO WRITE A THANK YOU NOTE FOR A GIFT YOU HATE, HOW TO CHANGE A FLAT, HOW TO BE EFFICIENT. Whenever you are doing one thing, ask yourself: what else could I be doing? On one recipe card, she has listed the rules of singing.

The #1 rule of singing is: KNOW YOURSELF.

Madeleine knows she frowns in the silence between lines. She knows if she straightens her spine she can hit more notes than if she hunches. She knows she makes up in full-throatedness what she lacks in technical know-how. She knows how to harmonize, with anything, with someone talking. Harmony is what melody carries in its pocket. She can burrow into a line of music and search out unexpected melodies. She can scat. She knows she is better at scatting if she has eaten a light breakfast. She knows an empty orb hovers inside her, near where the ovaries are drawn on the foldout in her health textbook: the diaphragm. In the diaphragm, the weather is always seventy degrees and sunny. The diaphragm is unable to be shaken even when she shakes. Madeleine has trained herself to, when she falters on a high note, clasp the reigns of her diaphragm and gather. Then she can collect a stray note, sweep it up in a flourish of runs or push further into it and reinforce it.

The song is over. In her flamingo notebook, Madeleine marks “Blossom’s Blues” next to Singing. The scatting was flat but had soul. B-, she writes.

The eggs are ready. She slides them onto a plate and adds a square of toast and a spoonful of jam. She sucks in air as she steps into her father’s bedroom. She can barely make out the shape of her father sleeping in bed, his back toward her. She clears a few medicine bottles, an ashtray, a half-empty glass of water, a wallet shot of her mother, to make space for the plate on the dresser.

Most mornings she leaves the plate and skedaddles but today she wants to feel close to something. She places her hand on his shoulder. It moves up and down in sleep. Madeleine breathes in and out, in time. He does not wake up.

Back in her bedroom, she pokes her nose through the curtains and confirms the glimmers are flurries. Using mittens, boots, a scarf, and an umbrella, Madeleine turns herself into a warm, dry house.