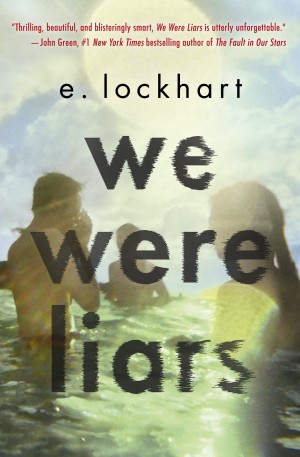 A beautiful and distinguished family.
A private island.
A brilliant, damaged girl; a passionate, political boy.
A group of four friends—the Liars—whose friendship turns destructive.
A revolution. An accident. A secret.
Lies upon lies.
True love.
The truth.

We Were Liars is a modern, sophisticated suspense novel from National Book Award finalist and Printz Award honoree E. Lockhart.

And if anyone asks you how it ends, just LIE.

Welcome to the beautiful Sinclair family.

No one is a criminal.

No one is an addict.

No one is a failure.

The Sinclairs are athletic, tall, and handsome. We are old-money Democrats. Our smiles are wide, our chins square, and our tennis serves aggressive.

No one is needy.

No one is wrong.

We live, at least in the summertime, on a private island off the coast of Massachusetts.

Perhaps that is all you need to know.

I live in Burlington, Vermont, with Mummy and three dogs.

I am nearly eighteen.

I own a well-used library card and not much else, though it is true I live in a grand house full of expensive, useless objects.

I used to be blond, but now my hair is black.

I used to be strong, but now I am weak.

I used to be pretty, but now I look sick.

It is true I suffer migraines since my accident.

It is true I do not suffer fools.

I like a twist of meaning. You see? Suffer migraines. Do not suffer fools. The word means almost the same as it did in the previous sentence, but not quite.

You could say it means endure, but that’s not exactly right.

My story starts before the accident. June of the summer I was fifteen, my father ran off with some woman he loved more than us.

Dad was a middling-successful professor of military history. Back then I adored him. He wore tweed jackets. He was gaunt. He drank milky tea. He was fond of board games and let me win, fond of boats and taught me to kayak, fond of bicycles, books, and art museums.

That June, summer fifteen, Dad announced he was leaving and departed two days later. He told my mother he wasn’t a Sinclair, and couldn’t try to be one, any longer. He couldn’t smile, couldn’t lie, couldn’t be part of that beautiful family in those beautiful houses.

He had hired moving vans already. He’d rented a house, too. My father put a last suitcase into the backseat of the Mercedes (he was leaving Mummy with only the Saab) and started the engine.

Then he pulled out a handgun and shot me in the chest. I was standing on the lawn and I fell. The bullet hole opened wide and my heart rolled out of my rib cage and down into a flower bed. Blood gushed rhythmically from my open wound,

then from my eyes,

It tasted like salt and failure. The bright red shame of being unloved soaked the grass in front of our house, the bricks of the path, the steps to the porch. My heart spasmed among the peonies like a trout.

Mummy snapped. She said to get hold of myself.

Don’t cause a scene, she told me. Breathe and sit up.

I did what she asked.

She was all I had left.

Mummy and I tilted our square chins high as Dad drove down the hill. Then we went indoors and trashed the gifts he’d given us: jewelry, clothes, books, anything. In the days that followed, we got rid of the couch and armchairs my parents had bought together. Tossed the wedding china, the silver, the photographs.

We purchased new furniture. Hired a decorator. Placed an order for Tiffany silverware. Spent a day walking through art galleries and bought paintings to cover the empty spaces on our walls.

Then we packed our bags and went to Beechwood Island.

Penny, Carrie, and Bess are the daughters of Tipper and Harris Sinclair. Harris came into his money at twenty-one after Harvard and grew the fortune doing business I never bothered to understand. He inherited houses and land. He made intelligent decisions about the stock market. He married Tipper and kept her in the kitchen and the garden. He put her on display in pearls and on sailboats. She seemed to enjoy it.

Granddad’s only failure was that he never had a son, but no matter. The Sinclair daughters were sunburnt and blessed. Tall, merry, and rich, those girls were like princesses in a fairy tale. They were known throughout Boston, Harvard Yard, and Martha’s Vineyard for their cashmere cardigans and grand parties. They were made for legends. Made for princes and Ivy League schools, ivory statues and majestic houses.

Granddad and Tipper loved the girls so, they couldn’t say whom they loved best. First Carrie, then Penny, then Bess, then Carrie again. There were splashy weddings with salmon and harpists, then bright blond grandchildren and funny blond dogs. No one could ever have been prouder of their beautiful American girls than Tipper and Harris were, back then.

They built three new houses on their craggy private island and gave them each a name: Windemere for Penny, Red Gate for Carrie, and Cuddledown for Bess.

I am the eldest Sinclair grandchild. Heiress to the island, the fortune, and the expectations.

Me, Johnny, Mirren, and Gat. Gat, Mirren, Johnny, and me.

The family calls us four the Liars, and probably we deserve it. We are all nearly the same age, and we all have birthdays in the fall. Most years on the island, we’ve been trouble.

Gat started coming to Beechwood the year we were eight. Summer eight, we called it.

Before that, Mirren, Johnny, and I weren’t Liars. We were nothing but cousins, and Johnny was a pain because he didn’t like playing with girls.

Johnny, he is bounce, effort, and snark. Back then he would hang our Barbies by the necks or shoot us with guns made of Lego.

Mirren, she is sugar, curiosity, and rain. Back then she spent long afternoons with Taft and the twins, splashing at the big beach, while I drew pictures on graph paper and read in the hammock on the Clairmont house porch.

Then Gat came to spend the summers with us.

Aunt Carrie’s husband left her when she was pregnant with Johnny’s brother, Will. I don’t know what happened. The family never speaks of it. By summer eight, Will was a baby and Carrie had taken up with Ed already.

This Ed, he was an art dealer and he adored the kids. That was all we’d heard about him when Carrie announced she was bringing him to Beechwood, along with Johnny and the baby.

They were the last to arrive that summer, and most of us were on the dock waiting for the boat to pull in. Granddad lifted me up so I could wave at Johnny, who was wearing an orange life vest and shouting over the prow.

Granny Tipper stood next to us. She turned away from the boat for a moment, reached in her pocket, and brought out a white peppermint. Unwrapped it and tucked it into my mouth.

As she looked back at the boat, Gran’s face changed. I squinted to see what she saw.

Carrie stepped off with Will on her hip. He was in a baby’s yellow life vest, and was really no more than a shock of white-blond hair sticking up over it. A cheer went up at the sight of him. That vest, which we had all worn as babies. The hair. How wonderful that this little boy we didn’t know yet was so obviously a Sinclair.

Johnny leapt off the boat and threw his own vest on the dock. First thing, he ran up to Mirren and kicked her. Then he kicked me. Kicked the twins. Walked over to our grandparents and stood up straight. “Good to see you, Granny and Granddad. I look forward to a happy summer.”

Tipper hugged him. “Your mother told you to say that, didn’t she?”

Tipper kissed his freckled cheek. “Go on, then.”

Ed followed Johnny, having stopped to help the staff unload the luggage from the motorboat. He was tall and slim. His skin was very dark: Indian heritage, we’d later learn. He wore black-framed glasses and was dressed in dapper city clothes: a linen suit and striped shirt. The pants were wrinkled from traveling.

Granddad set me down.

Granny Tipper’s mouth made a straight line. Then she showed all her teeth and went forward.

“You must be Ed. What a lovely surprise.”

He shook hands. “Didn’t Carrie tell you we were coming?”

“Of course she did.”

Ed looked around at our white, white family. Turned to Carrie. “Where’s Gat?”

They called for him, and he climbed from the inside of the boat, taking off his life vest, looking down to undo the buckles.

“Mother, Dad,” said Carrie, “we brought Ed’s nephew to play with Johnny. This is Gat Patil.”

“His father passed on, just this year,” explained Carrie. “He and Johnny are the best of friends. It’s a big help to Ed’s sister if we take him for a few weeks. And, Gat? You’ll get to have cookouts and go swimming like we talked about. Okay?”

But Gat didn’t answer. He was looking at me.

His nose was dramatic, his mouth sweet. Skin deep brown, hair black and waving. Body wired with energy. Gat seemed spring-loaded. Like he was searching for something. He was contemplation and enthusiasm. Ambition and strong coffee. I could have looked at him forever.

I turned and ran away.

Gat followed. I could hear his feet behind me on the wooden walkways that cross the island.

I kept running. He kept following.

The adults remained talking on the dock, circling politely around Ed, cooing over baby Will. The littles did whatever littles do.

We four stopped running at the tiny beach down by Cuddledown House. It’s a small stretch of sand with high rocks on either side. No one used it much, back then. The big beach had softer sand and less seaweed.

Mirren took off her shoes and the rest of us followed. We tossed stones into the water. We just existed.

I wrote our names in the sand.

That was the beginning of us.