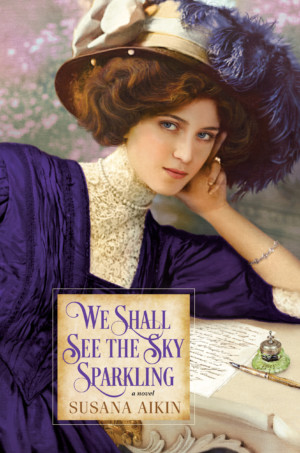 We Shall See the Sky Sparkling

Susana Aikin’s debut is an epic historical novel set in turn-of-the-20th-century London and Vladivostok, against the backdrop of the Russo-Japanese War and the emergence of the Bolshevik revolution, which follows the exploits of Lily, a talented young actress disinherited by her father, who reaches great artistic heights on the London stage, only to be betrayed and whirled into a romance with a Russian count with whom she absconds to faraway Siberia. Lily, who is passionate about the stage and ambitious to succeed, refuses throughout to surrender to Edwardian expectations demanded of a young woman: she is raped and later further betrayed by her London co-star Wade; falls in love with but abandons the good-hearted Chut; meets a crowd of royal revolutionaries in St. Petersburg; follows Sergei, the father of her child, to Vladivostok, where she loses both Sergei and her baby in the aftermath of war. She finally reconnects as a mature, wizened woman with an older and still-ardent Chut, with whom she returns to London to set up an independent theater venue. The book is loosely based on the author’s great grand-aunt’s story, a theatrical dancer who traveled to St. Petersburg and Vladivostok with a Russian lover and later returned to Manchester in 1904 to die of tuberculosis at the age of 24.