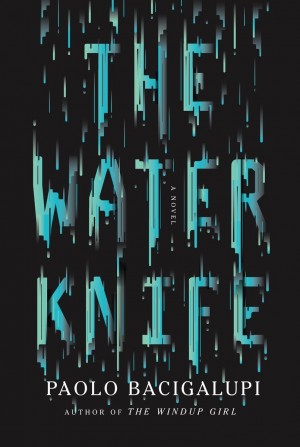 In the very near future, the American Southwest is battling for water. Phoenix is covered in dust, desolate, and on the verge of total breakdown. Severe drought has demolished Texas.

Into the fray, steps Angel Velasquez, a water knife working for Las Vegas water mogul Catherine Case. Case is in the Arcology business, opulent real estate in which lush, luxury living environments are raised out of dry earth. Zipping around in his tricked out Tesla, Angel “cuts” water for Case. Hijacking pumping stations or unearthing long forgotten water rights, he is a detective and mercenary rolled into one. When an informant shows up dead in Phoenix, Angel is sent to find out what has happened. It turns out that a major power play is taking place, and the race is on to find a long-forgotten deed between the state of Arizona and a Native American tribe that grants Phoenix the rights to enough water to rebuild itself but to crush Las Vegas in the process. A shady West Coast conglomerate is watching closely, as is Lucy Monroe, a Phoenix-based journalist, desperate to save the city she calls home. Angel and Lucy are natural enemies, but the two realize the only way they may stay alive is by joining forces. The missing piece to the puzzle is Maria, a fifteen-year-old Texas migrant, blessed with street smarts, but burdened by getting herself into something over her head. Pretty soon the body count begins to rise, alliances come in to question, and it looks like either Phoenix or Las Vegas is going down in flames.