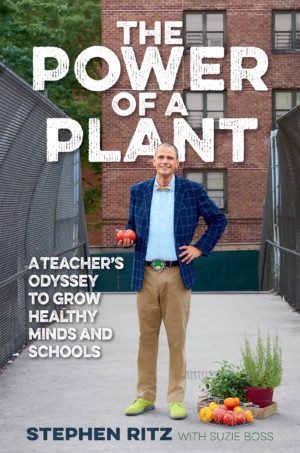 The Power of a Plant

In The Power of a Plant, globally acclaimed teacher and self-proclaimed CEO (Chief Eternal Optimist) of Bronx County, Stephen Ritz, shows you how, in one of the nation’s poorest communities, his students thrive in school and in life by growing, cooking, eating, and sharing the bounty of their green classroom. Born and raised in the Bronx, Stephen knew precisely nothing about farming and tipped the scales at about 300 lb. But when a flower broke up a brawl among burly teenagers at a tough South Bronx high school, Stephen saw a teachable moment to connect kids—and himself—with nature. By using plants as an entry point for learning across all subjects, he transformed his classroom into a vibrant and hopeful space. Student attendance soared from 40 to 93 percent. Disciplinary issues plummeted. In a school with a 17 percent graduation rate and staggering crime rate, every one of his students finished school and stayed out of jail. He then took control of his own health and lost more than 100 pounds to model good behavior for his students. After growing more than 40,000 pounds of vegetables in school, he figured out how to bring the magic of gardening into the heart of schooling for kids of all ages.