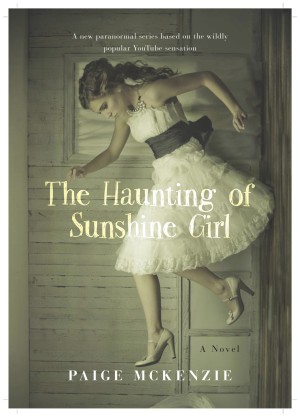 The Haunting of Sunshine Girl

A new paranormal Young Adult series based on the wildly popular YouTube channel of the same name, which has been optioned for film and television by The Weinstein Company. Described as Gilmore Girls meets Paranormal Activity for the new generation, The Haunting of Sunshine Girl: Book One is about an “adorkable” teenager living in a haunted house. Shortly after her sixteenth birthday, Sunshine Griffith and her mother Kat move to the rain-drenched town of Ridgemont, Washington. Sunshine and her mother have always shared a special bond, but from the moment they cross the Washington state line, Sunshine feels a mysteriousness she cannot place. And even if Kat doesn’t recognize it, Sunshine knows something about their new house is just… creepy. In the days that follow, things only become stranger, as Sunshine is followed by an icy breeze, and eventually, the child’s voice she hears on her first night evolves into sobs. She can hardly believe it, but as the spirits haunting her house become more frightening—and it becomes clear that Kat is in danger—Sunshine must accept what she is, pass the test before her, and save her mother from a fate worse than death.