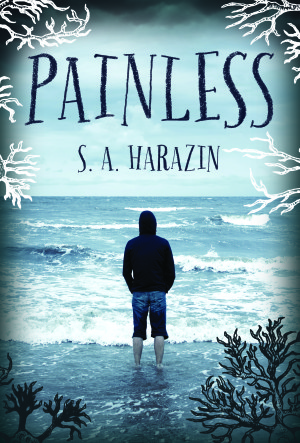 David Hart shouldn’t be alive now. He can’t feel pain. He has scars for wounds he’s never felt. Kids who have the kind of rare condition he has don’t usually survive childhood, but at seventeen, David’s beaten the odds. So far, at least. For his whole life he’s been protected and monitored, living by a careful set of rules. And then there’s Luna, the nurse trainee who’s been hired to keep an eye on him. David wants more than anything to live life on his own terms. But now the things he wants to live for have a lot to do with Luna.

My grandmother taught me to follow a schedule so I can stay alive. Half my life is devoted to checking my body and looking at details. I do the morning body check in the bathroom, and I’m always scared I’ll see a burn, a cut, or a bone. Actually, I think I’d notice a bone right away. Then I shower and apply special lotion because my skin dries out from not ever sweating.

I dress and go back into my room.

This is why I always dress in the bathroom. I never know when Nana will be waiting for me in my room.

“Did you do your body check?” she asks.

I sit on the bed. “Yes. You know you don’t have to ask me that all the time.”

She ignores my whining. “What’s your temperature?”

“Ninety-seven.” I could make up anything.

“Did you go to the bathroom?”

It isn’t the first time I’ve told her that.

With shaky hands, Nana checks my blood pressure and my pulse. She peers down my throat using a penlight. Then she looks into my eyes and ears. I don’t know what I have inside me that’s so interesting. Last of all, I pull up my shirt, and she takes a look at my back.

Spencer does this when he’s around, but nobody sees me naked. I have my pride.

I smooth out my shirt, look at her, and see how pale and out of breath she is. “You okay?” I ask.

“I’m all right for now,” she says. “But I can’t even find my shoes. I’m old and tired and dying, and you need to be prepared.”

I just sit staring. I can’t move. Can’t breathe. It’s like the world is really flat, and I’ve sailed over the end.

Once in the hospital I had a pneumothorax—a collapsed lung—and I was fighting to breathe, and there was no way I could keep breathing without help. All I could do was gasp hungrily for air, and then I stopped gasping. I think I died for a moment. Everything turned black.

Later when I awoke, I had a big, fat tube in my chest, and I was breathing.

Nana’s probably just saying stuff because of the dementia. Sure, she’s old, but she doesn’t drink, smoke, or eat unhealthy food.

In the kitchen, my vitamins and minerals are lined up on the counter. They’re to make me smarter and stronger. They do not work, and I don’t like them. I usually throw them away when Nana isn’t looking.

She looks up from her coffee. “January first.” She smiles at me, shaking her head.

“Happy New Year,” Spencer says. He’s carrying an old TV. “The VCR is built into the TV. Sorry I couldn’t bring it over sooner. I got home yesterday. Aspen was great. You should’ve come with me.”

I can see it now. I’m sitting in the ski lodge in front of the fireplace reading a book. People laugh and head out to go skiing. I stay where I am.

Here’s what I know about skiing. It’s fun to watch on TV, but when you have a messed-up leg, it’s not a good idea to go skiing unless you like hanging out alone in a lodge with only your brain to talk to you.

“Look on the positive side,” he says. “You wouldn’t feel a thing.”

Spencer laughs and connects the TV. “What’s on the tape?”

“Nana said it was a surprise.”

He rolls his eyes and slides the tape into the TV.

The picture’s fuzzy, but I can see a man sitting in a room and the white wall behind him. “We’re Off to See the Wizard” plays.

Spencer adjusts the controls, and the picture clears. He increases the volume and sits on the bed.

I sit in front of the TV. Nana would say I’d go blind sitting too close. She’s also said I’d go deaf from loud music. Wonder what I did to destroy my nerve endings.

I see a man and he starts talking.

Dear David, I’ve collected pictures from some of your birthday parties and made this video for you so you don’t forget.

I think he’s somebody I’m supposed to know.

Dear David, you turned two today. I am sorry I don’t have a recording of your very first birthday, but you had two parties for your second birthday.

I see me. I’m wearing gloves, long sleeves, a mouth guard, and a pinkish helmet. I look like I’m from outer space.

Hi, son. Today you are three. We had your party in the hospital, and all the nurses sang happy birthday to you. I hung a stuffed elephant from your IV pole.

“Yeah,” he says in a depressing voice.

I look like I’m sleeping. I’m getting oxygen through a mask.

“I wonder what happened to the elephant,” I say to Spencer.

I almost wish I was watching this alone. Spencer doesn’t understand. The video continues.

Dear David, here we are, celebrating your fourth birthday. I can’t believe how fast time flies. You are amazing. Don’t ever forget that.

He quits talking. I’m sitting in front of a piano, banging on the keys, and singing “Happy Birthday to Me.”

There aren’t any kids in the picture, and I have a toothless smile on my face. If I was so amazing, why did he dump me at Nana’s and never come back?

“If I Only Had a Brain” starts playing, and my dad speaks.

I thought if you could make it until you were a teenager, you wouldn’t have as much to deal with because you would have learned so much about your condition. But things happened. Do you remember when we watched The Wizard of Oz? The Lion wanted courage, the Scarecrow wanted a brain, and the Tin Man wanted a heart. But it didn’t matter because they already had what they sought, only they didn’t know it.

There’s a collage of everything with “Over the Rainbow” playing. Suddenly my dad starts talking and crying.

Dear David, well, it isn’t your birthday, but today is a big day for you. I’m taking you to Nana’s house for a while. You’ll be safe and happy with her.

I can’t believe this. He leaves me a lousy tape when he could’ve visited me. It’s been eleven years, and he’s never sent me a card or anything. He’s pathetic.

Spencer turns off the TV and ejects the tape. When he hands it to me, he doesn’t look at me.

It’s the look-away that happens when somebody feels embarrassed for the other person.

“Anybody ever say you look like your father?” he asks.

I smile. “Only Nana. Nobody else knew him.”

“If you don’t mind me asking, what happened to your mother? She isn’t in any of the pictures.”

“They don’t call or come to see you?”

“It doesn’t matter,” Spencer says. “You know what your grandmother said about you? She said the Creator sent you to your grandfather and her. She said you saved them.”

I probably did save them. I kept them from doing much of anything.

I ask him if he wants to hang out a while.

“I can’t,” he says. “We have company, and Cassandra is coming over. My mom’s fixing a huge dinner.”

Cassandra plays the keyboard in Spencer’s band. I don’t know her very well, but she has an argument with Spencer about once a week. I overheard her talking to Spencer about me. “Aren’t you embarrassed?” she asked. “Poor little rich kid has you to make up his bed for him.”

She doesn’t know about me. It’s not like I advertise I can’t feel pain.

He sits back down on the bed. “Remember a few weeks ago when I told you I made it into Vanderbilt and how I’m going to be really busy this semester?”

“I’m quitting, but I’ve found somebody to replace me. I’ll be here early tomorrow morning to show Ms. Smith what to do,” Spencer says. “You wouldn’t believe how many people I talked to before I found the right person. You need somebody new anyway. We’re around each other all the time.”

I’m getting a sick feeling, kind of like I ate too much pizza and exploded.

“We do the same thing day in and day out. Trust me. It’s time for both of us to move on. This way I can come over whenever I want to and not feel like I have to.”

“Is it because Cassandra says it’s demeaning for you to work for me?”

“I understand,” I say. I really do. He knows it’s his time to move on.

“James gave me the tape the day he left you here,” Nana says from her recliner. “I watched it back when we had a VCR and then forgot about it.”

“But I don’t understand why he didn’t come back.”

“I don’t think we’ll ever understand. Your parents divorced, and James brought you here. Then they disappeared,” Nana says. “I’ve told you before. We searched. We filed missing persons’ reports. We hired detectives.”

“When they don’t want to be found,” she says, trying to catch her breath. “You were constantly covered with bruises. You’d jump out of a tree. You’d bang your head. You’d chew your mouth or your hands. They were accused of child abuse every time you were taken to the emergency room.”

She’s paler than I’ve ever seen. “It was like that for us when you first came to live here. Your grandfather was arrested once, but then Dr. Goodman explained to the authorities about CIPA. Even then, they did not believe him at first. Joe managed to make the authorities understand your condition.”

“It’s all right,” I say. I can’t ask her any more questions. Not now. Maybe not ever.

“He’ll find him,” I say, but Joe needs to hurry. Time’s running out.

My body-check routine is repeated in the evenings. Sometimes I turn on the song “Staying Alive” and listen to the music for inspiration. I’m so good at being careful that I hardly ever see blood anymore.