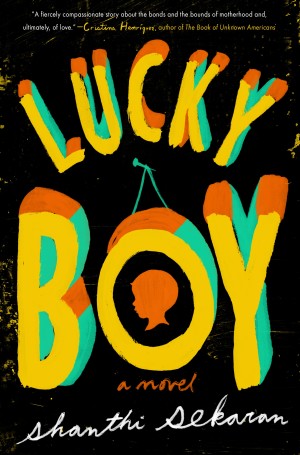 A heart-wrenching novel that gives voice to two mothers: a young undocumented Mexican woman and an Indian-American wife whose love for one lucky boy will bind their fates together.

Solimar Castro-Valdez is eighteen and drunk on optimism when she embarks on a perilous journey across the U.S./Mexican border. Weeks later she arrives on her cousin’s doorstep in Berkeley, CA, dazed by first love found then lost, and pregnant. But amid the uncertainty of new motherhood and her American identity, Soli learns that when you have just one precious possession, you guard it with your life.

Kavya Reddy has always followed her heart. A mostly contented chef, the unexpected desire to have a child descends like a cyclone in Kavya’s mid-thirties. When she can’t get pregnant, this desire sets Kavya on a collision course with Soli, when she is detained and her infant son comes under Kavya’s care. As Kavya learns to be a mother—the singing, story-telling, inventor-of-the-universe kind of mother she fantasized about being—she builds her love on a fault line, her heart wrapped around someone else’s child. Lucky Boy is an emotional journey that will leave you certain of the redemptive beauty of this world.