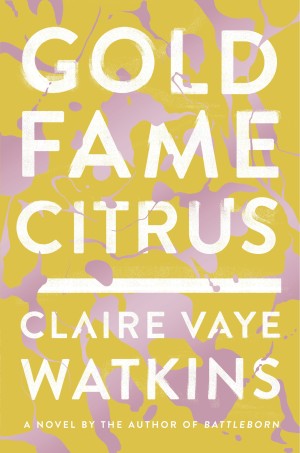 Unrelenting drought has transfigured Southern California into a surreal, phantasmagoric landscape. Most “Mojavs,” prevented from freely crossing borders to lusher regions, have allowed themselves to be evacuated to internment camps. In Los Angeles’ Laurel Canyon, two young Mojavs—Luz, once a poster child for the Bureau of Conservation and its enemies, and Ray, a veteran of the “forever war” turned surfer—squat in a starlet’s abandoned mansion. Holdouts, they subsist on rationed cola and whatever they can loot, scavenge, and improvise.  The couple’s fragile love somehow blooms in this arid place, and for the moment, it seems enough. But when they cross paths with a mysterious child, the thirst for a better future begins. They head east, a route strewn with danger: sinkholes and patrolling authorities, bandits and the brutal, omnipresent sun. Ghosting after them are rumors of a visionary dowser—a diviner for water—and his followers, who whispers say have formed a colony at the edge of a mysterious sea of dunes.  Immensely moving, profoundly disquieting, and mind-blowingly original, Watkins’s novel explores the myths we believe about others and tell about ourselves, the double-edged power of our most cherished relationships, and the shape of hope in a precarious future that may be our own.