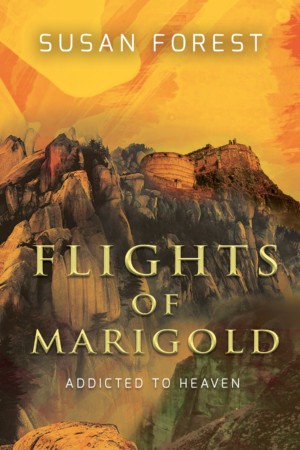 One risk, one chance.
After eight years, the seven realms of Shangril still remain shattered. Now, hiding at the edge of the world, Meg and Janat Falkyn, fugitive daughters of an imperial magiel, seek help from their youngest sister, Rennika, to help them solve a secret. To find their missing mother’s prayer stone. Now, hopes for their homeland and death tokens hang in balance. Now, opportunities to restore the beauty, nobility, and magic of their race before going extinction.
But more secrets hidden in alleyways, castles, brothels, saloons . . .
A calculating regent enriching himself with a steam-driven textile monopoly. The ambitious High King’s sister engaging in civil disobedience. A charming swindler setting up an elaborate scheme.
Threaten to expose the sisters’ identities and divide Meg from her sisters. And Heaven is only one step away. So are the High King’s armies and his Marigold breeding program, and the rebels who want the sisters back. Beneath it all, the ugly mark of addictions squirms, poisoning the survival of sisterhood and familial bonds.
Flights of Marigold is an epic political tale of survival, addictions, revenge, and redemption for three magiel sisters in an insignificant hinterland where they attempt to carve a piece of happiness and hold on to their ambitions and dreams, in spite of Heaven’s many secrets and schemes to stop them.