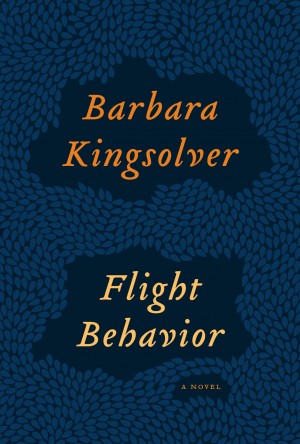 Set in the present in the rural community of Feathertown, Tennessee, Flight Behavior is the story of Dellarobia Turnbow, a petite, razor-sharp young woman who nurtured worldly ambitions before becoming a mother and wife at seventeen. Now, after more than a decade of tending small children on a failing farm, suffering oppressive poverty, isolation, and her husband’s antagonistic family, she mitigates her boredom in an obsessive flirtation with a handsome younger man.

Headed to his secluded cabin to consummate their relationship, she instead walks into something on the mountainside she cannot explain or understand: a forested valley filled with silent red fire that appears to Dellarobia to be a miracle. Her discovery is both beautiful and terrible, and elicits divergent reactions from all sides. Religious fundamentalists claim it as a manifestation of God; climate scientists scrutinize it as an element of forthcoming disaster; politicians and environmentalists declaim its lessons; charlatans mine its opportunity; international media construct and deconstruct Dellarobia’s story; and townspeople cope with intrusion and bizarre alterations of custom.

After years lived entirely within the confines of one small house, Dellarobia finds her path suddenly opening out and ultimately leading into blunt and confrontational engagement with her family, her church, her town, her continent, and finally the world at large. Over the course of a single winter, her life will become the property of the planet and, perhaps for the first time, securely her own.