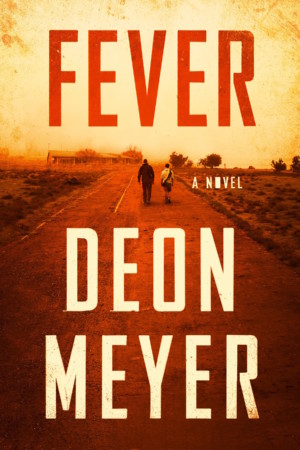 A stunning standalone from a master of suspense, a powerful story of love, survival, and betrayal set in a world devastated by a fatal virus known as ‘the Fever.’
Deon Meyer is a household name in South Africa and has garnered fans around the world for his bestselling Benny Griessel thriller series. However, Fever is like nothing else Meyer has written before—a standalone, epic, post-apocalyptic thriller that is as thought-provoking as it is page-turning.
Nico Storm and his father Willem drive a truck through a desolate land. They are among the few in South Africa—and the world, as far as they know—to have survived a devastating virus. Willem Storm, a thinker and a leader, has a vision for a new community rebuilt from the ruins. And so Amanzi is formed by a disparate group of survivors: Melinda, rescued from brutal thugs, Hennie, with his vital Cessna plane, Beryl with her ragtag group of orphans, and Domingo, the man with the tattooed hand. And then there is Sofia, the most beautiful girl that Nico has ever seen, who changes everything.
As the community grows, so do the challenges it must face—not just from external attacks, but also from within. And Nico will have his strength and loyalty tested to their limits as he undergoes an extraordinary rite of passage in this brand new world.