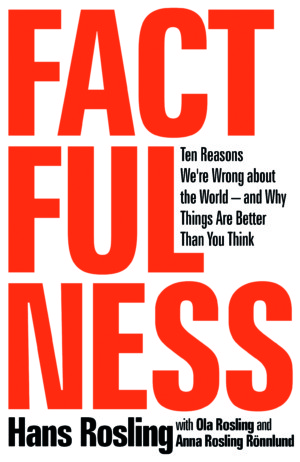 When you ask people simple questions about global trends, they systematically get the answers wrong. How many girls go to school? What’s the average life expectancy across the world? What will the global population will be in 2050? Do the majority of people live in rich or poor countries? In Factfulness, Hans, Ola, and Anna Rosling show why this happens. Based on a lifetime’s work promoting a fact-based worldview, they reveal the ten dramatic instincts, and the key preconceptions, that lead us to consistently misunderstand how the world really works. Along the way they tell incredible stories and reveal some jaw-dropping facts: the fastest drop in births per woman in world history went completely unreported in the free Western media; of the ten countries with the fastest economic growth in 2016, nine of them were not fully democratic; 30% of the world lived in poverty 20 years ago but only 11% do now. Written by Hans as he approached death, it features surprising, shocking, funny and poignant stories from Hans’ life – from his difficult childhood in Sweden, through his work in Mozambique as a junior doctor in the ‘80s when it was the poorest country on earth and he was the only doctor for 300,000 people; to his later work wowing audiences of millions around the world. Inspiring and revelatory, Factfulness is a book of stories by a late legend, for anyone who wants to really understand the world.