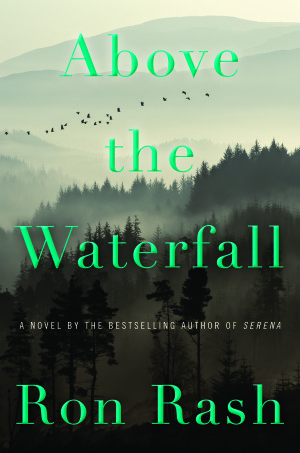 In this poetic and haunting tale set in contemporary Appalachia, New York Times bestselling author Ron Rash illuminates lives shaped by violence and a powerful connection to the land.

Though sunlight tinges the mountains, black leatherwinged bodies swing low. First fireflies blink languidly. Beyond this meadow, cicadas rev and slow like sewing machines. All else ready for night except night itself. I watch last light lift off level land. Ground shadows seep and thicken. Circling trees form banks. The meadow itself becomes a pond filling, on its surface dozens of black-eyed Susans.

I sit on ground cooling, soon dew-damp. Near me a moldboard plow long left. Honeysuckle vines twine green cords, white flowers attached like Christmas lights. I touch a handle slick from wrist shifts and sweaty grips. Memory of my grandfather’s hands, calluses round and smooth as worn coins. One morning I’d watched him cross the field, the steel oar rippling soil. In its wake, a caught wave of sillion shine. But this plow has wearied into sleep. How long lying here? Perhaps a decade, since saplings and saw briar rise amid broom sedge. Above all else, the high hover of black-eyed Susans, bright yellow in full-petaled bloom. What has brought me here.

A deer emerges from the woods, nose up, stilt step then steadying pause, another hoof lifted. Dark rises around me. The Susans float like water lilies. All else disappears but they hold their yellow glow. Moon mirrors, sun ghosts. Dream abeyant. When the night-pond floods its banks, I walk the trail to the state park truck. Maybe another time, Les had answered when I invited him, claiming sheriff business to attend to. The trail steepens. When I look back at the meadow, only darkness.

Lascaux. What wonder must it have been to make such a descent. Tar-pitched torch-wood swabbing stone with light. Swerves and drops and slant downs. Dark rushing up behind each step. Then to find them there in the cave’s hollow core—bison and ibex, but others lost elsewhere to the world: saber cats and woolly mammoths, Irish elk. All live-motioned in the wavering light, girthed by curves of stone. Amid it all the runic human handprint. Where less art’s veil between us and the world? How strange that Hopkins’ quill-scratches let me see more. Invisioning before seeing. And yet, the message of what once was those winding cave walls tells. What wonder yet echoes from the world’s understory.

Where does a story really begin? One thing can’t happen unless other things happened earlier. I could say this story began with an art class I took in ninth grade, or broken promises, one by Becky Shytle and one by me, or that it began with the first words the world brought forth, a notion Becky would like. Instead, I’ll say it began on the Monday I first saw the blue cell phone, the same phone I held, briefly, in my hand the following Friday.

This all happened three weeks before I retired as county sheriff. There would be a meth bust on Tuesday, but otherwise I figured it to be an easy week—tie up some more loose ends, do a few more final favors, get my retirement paperwork done. I’d already quit coming in before midmorning, letting Jarvis Crowe, my replacement, get used to running things on his own. An easy week, I figured, but when I got to the office on Monday, Ruby, our day-shift dispatcher, let me know it would be otherwise.

“C. J. Gant called a few minutes ago, Sheriff. He’s coming to see you. It’s important, he said. Of course we know it’s always important if it involves him or that resort.”

“Jarvis is checking out a break-in and Barry’s serving a bench warrant.”

“Not any crime,” Ruby said. “Bobbi Moffitt was being her usual nosy self over at the café this morning. Said to me it didn’t seem right for a man to retire at fifty-one. I told her thirty years for a lawman was like aging forty years for regular folks. And it is.”

“I suppose so,” I said. “I’m closing my door so I can try to figure out how to access these damn retirement forms.”

“My grandson can come over and help you.”

“I’ll figure it out. I’d like to retire without some sixteen-year-old making me feel like an idiot.”

“Send him on in when he gets here.”

The red light was flickering on my office phone. The message was from Pat Newton, who owned the paper mill outside town. He’d offered me a part-time night watchman job, two twelve-hour shifts, one on Saturday and one on Sunday, starting next month. “I need an answer by next week, Les,” Pat’s voice said.

Clearing out my office. That was something else I needed to do, though that would be mainly filling trash cans, shredding old files. All I’d take with me would be some books off the shelf, a few things stashed in my desk. And the three paintings on the wall, two framed watercolors I’d done, each with a ribbon proclaiming best in county, and the print of Edward Hopper’s Freight Car at Truro.

Even Hopper’s boxcars are alone.

That was the first thing Becky had said when she’d entered my office two years ago. Not how most people would start a conversation, but as soon as Becky said it I saw it too—the freight car hitched to no other. Not a single shadow other than its own. The sky empty.

Yes, it seems so, I’d answered that morning, our first exchange like passwords in a Masonic ritual.

I checked my e-mails from Becky, the first from last night.

I wish you could have seen the black-eyed Susans. They were transcendent, Les. Maybe another time you can go. There’s something else, but it’s not so good. Darby took Gerald’s lawn mower three weeks ago and still hasn’t returned it. Can you help get it back?

Becky wouldn’t see it that way, though. In her eyes Gerald could do no wrong, even though I’d cautioned her that Gerald wasn’t quite the lovable old man that she thought.

There was a school shooting in Atlanta this morning.

Anywhere a school shooting happens, not just around here, I want to take extra precautions at the park. Becky had told me that during her first office visit. By then I’d heard the scuttlebutt around town that Locust Creek Park’s new superintendent was a bit quair, as the older folks put it—that she didn’t own her own vehicle, just a bike, and no TV or phone. Not easy to talk to either, people said, some claiming Becky was autistic. I’m not autistic, she’d told me later, I just spent a lot of my life trying to be. New on the job, so overzealous, I’d thought at first. Then Becky had brought up an elementary school shooting in Emory, Virginia, in 1984. Two students and a teacher had been killed. She’d given enough details that I’d asked if someone she knew had been there. I was there, Becky had answered. I’d been curious enough afterward to Google Becky Shytle, but instead of something about the shooting, I’d found a newspaper photo of her and Richard Pelfrey, a terrorist who, had his timer worked right, would have killed more people than Ted Kaczynski and Eric Rudolph combined.

Two years and I still didn’t know what word to use for our relationship. A few “dates,” a few kisses. But more than anything, a wary out-of-step dance. Except for the first time I’d been in Becky’s cabin. On that evening it had almost become more. I’d brought a bottle of wine and as Becky got us glasses, I’d sat on the couch and surveyed the cabin’s front room, curious to see what it might reveal about her. There was a shelf of books, most connected to nature, but also some poetry and art books, including one I’d borrowed about the cave art in Lascaux. On the fireboard were a crumbling hornet’s nest, a gold pocket watch, and a single photograph. In one corner a butter churn, in another corner a chair, a table, and a lamp. Except for the couch, that was it—no TV or CD player, no clock or radio or computer, no rug. Nothing on the walls, not even a calendar. The photograph of two old people, sun streaked and in an oval frame, seemed, like the rest of the room’s contents, remnants left in a house long abandoned.

That night, for the first time, our kisses were the kind that led to a bed. But our talk was even more intimate, as if the room’s feeling of time turned back allowed us to speak more freely of our pasts. Becky talked about her months with Richard Pelfrey, and I’d told her about my ex-wife Sarah, sharing things I’d never told anyone. Becky had also told me about her childhood, the shooting at her elementary school and what had happened in the months afterward. We spoke of promises.

But with the late hour and empty wine bottle came the feeling that we’d revealed too much, violated something within ourselves, the very thing that had attracted us to each other in the first place. So we had left it there for six months. More than once I’d imagined a listing on an Internet dating site:

Sorry to hear about the school shooting, I typed, then remembered I needed to collect my monthly “stipend” from Jinks Sorrels. I may be out and about later today. Will try to come by the park. Les

Ruby once asked what sort of relationship Becky and I had. I’d answered that I didn’t know the word for it, but a word came to me now.

Accomplices. Maybe that was what we were.