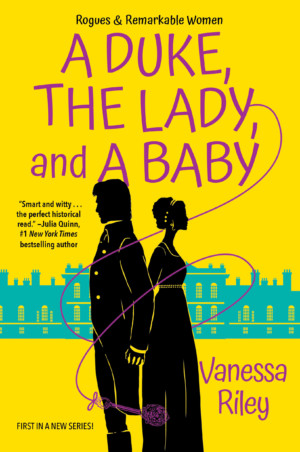 A Duke, The Lady, and A Baby

In acclaimed author Vanessa Riley’s sweeping an utterly swoon-worthy first installment of a riveting new Regency romance series, an Afro-Caribbean heiress and recent widow finds herself falling for the dashing Duke who was named as a guardian to her son. When headstrong West Indian heiress Patience Jordan questioned her English husband’s mysterious suicide, she lost everything: her newborn son, Lionel, her fortune and her freedom. Falsely imprisoned, she risks her life to be near her child—until The Widow’s Grace gets her hired as her own son’s nanny. But working for his unsuspecting new guardian, Busick Strathmore, Duke of Repington, has perils of its own. Especially when Patience discovers his military strictness belies an ex-rake of unswerving honor and unexpected passion. A wounded military hero, Busick is determined to resolve his dead cousin’s dangerous financial dealings for Lionel’s sake. But his investigation is a minor skirmish compared to dealing with the forthright, courageous, and alluring Patience. Somehow, she’s breaking his rules, and sweeping past his defenses. Soon, between formidable enemies and obstacles, they form a fragile trust—but will it be enough to save the future they long to dare together?